Erpenius's Arabic grammar - the final edition, with annotations by the young Hermann Bredenkamp

A Göttingen student's hand-annotated copy: the final edition of the venerable Arabic grammar first published by Erpenius in 1613, the work that dominated Western instruction in the Arabic language for two centuries. This copy was owned by the poet and pastor Hermann Bredenkamp (1760-1808), a native of Bremen, who had taken up his studies of theology and oriental languages at Göttingen in 1780. Among his teachers was not only Michaelis himself, but also the great Swedish orientalist Matthias Norberg (1747-1826), who in 1781 passed through Göttingen on his return journey from Constantinople, visiting Michaelis. Bredenkamp's annotations in the book's margins frequently refer to Norberg's personal comments on the grammatical matter and especially on the pronunciation of modern vernacular Arabic of Morocco. On the interleaves of the Arabic chrestomathy, Bredenkamp has occasionally noted vocabulary and word references, but this part does not appear to have been worked through in detail, and it is the grammar in which the most extensive annotations occur, all written in ink in Bredenkamp's meticulous and minute hand.

By the 18th century, Erpenius's grammar had seen several re-issues (with various amendments) by Deusing (1636), Golius (1656), and Schultens (1748 and 1767), before the Biblical scholar Michaelis produced a German translation in 1771. The present second edition, published a decade later, entirely omits the name of Erpenius: "owing to the many additions (for the greater part unneccessary according to Schnurrer) the work may now be called Michaelis' own" (Smitskamp, p. 278). This, of course, was the grammar of choice at the University of Göttingen under Michaelis' tutelage. It was not until 1810 that Silvestre de Sacy's "Grammaire Arabe" would produce an actual advance in the field. 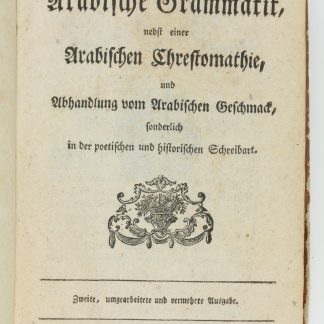