To America and Admiral Cornwallis on the HMS Lion

An extensive German commonplace book, continuously expanded for nearly a century by a family of merchants, farmers, and mariners, one of whom sailed to Virginia on the HMS Lion to join the fleet of Admiral Cornwallis, probably in 1779 during the American Revolutionary War.

The first part (comprising some 40 ff.) offers an anthology of maxims, aphorisms, and anecdotes about the Vienna Court Theatre, about Garrick and Hogarth, King George III and Voltaire, etc., apparently mainly compiled in the 18th century, with a few later additions by other hands. The second part, begun by the same writer and considerably expanded by several later owners of the book, contains a vast miscellany of historical and historico-cultural themes. Items include a piece about verbal responses to sneezing, another about wigs and elaborate hairstyles throughout history, about the history of playing cards; and tables for housewives with which to calculate their annual expenses. Later entries focus more strongly on household remedies against illnesses (such as cholera and dropsy) and agricultural advice (how to get rid of weevils, how to increase the fertility of fruit trees).

Occasionally, the notes will provide a more immediate glimpse of the life of the writer: underneath a discussion of how to calculate the deadweight tonnage of a ship of 100 cannons with a crew of 1000 men, an early 19th century owner who signs his name "Bindseil" states that he himself "sailed on an English ship of the 2nd line, blue flag, of 64 cannons, named Lion, under Captain Fox, which was taking us to the English general Cornwallis in Virginia. On this ship were 1375 souls, 4 live oxen, 12 large pigs, the same number of rams, and 4 horses, which are not taken into account by the above calculation, as little as the minimum two anchors are, each of which weighs some 600 pounds and yet is quite indispensable [...]" (transl.). Not infrequently, an entry will cite the source from which it is drawn: newspapers and journals mentioned include the "Hamburgischer Correspondent", "Holzmindisches Wochenblatt", "Hannoverscher Anzeiger" and "Braunschweigische Zeitung", pointing to a Northern German origin. 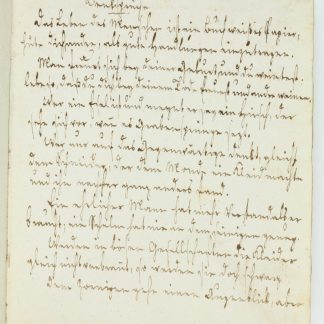