Rare complete set of Jan van der Straet's magnificent series of 104 large hunting prints, including falconry, fishing and even bee-keeping, engraved in the years 1578 to ca. 1596 by Philips Galle and others associated with him. It includes scenes of catching birds of prey and of hunting with them, not only hawks or falcons, but also owls. The other hunting prints show the hunting of elephants, various wild cats, wild boars, bears, crocodiles and other big game, apes (putting on boots!), smaller animals such as rabbits, badgers and porcupines, but also unicorns, fauns (playing pan-pipes!), giant snakes, dragons (or are they komodo dragons?), sea monsters and other mythical creatures. Some scenes are certainly disturbing for anyone who cares about animals: one shows a live elephant with its trunk cut off. The title-print has scroll-work and other cartouches with about 30 animals in or looking out of them, and the arms of the dedicatee, the jurist Henricus van Osthoorn, at the foot (3 horns quartered with 3 fleurs-de-lis, helmed, mantled and crested with a hand holding a horn).

Philips Galle (1537-1612) published 43 prints in the present series with a different title-print in 1578, engraving most himself but with a few by Antonius Wierix II. Galle published the complete series with the present title-print in its earliest state ca. 1596 with 61 additional prints engraved by his son, sons-in-law and pupils Cornelis Galle, Adriaen Collaert, Jan Collaert II and Karel van Mallery. At least some of the original 43 plates became rather worn and were therefore replaced by very close copies, apparently before Philips Galle's death in 1612.

Johannes Galle (1600-76), was the grandson of Philips Galle and son of Theodore Galle (1571-1633). He took charge of the family print publishing firm when his father died in 1633 and continued it until his own death in 1676. Nicolaes Visscher in Amsterdam sold much of Galle's stock of prints and copper plates in 1677, but also sold the present series under his own name, so any set bearing Johannes Galle's name on the title-page must have been published between 1633 and 1676. We have found no exact matches in the literature, but the paper certainly dates from the second half of the 17th century and the most similar examples date from the years 1658-91.

With a ca. 1900 armorial bookplate of C. M. Wakefield (motto "spero") and the modern armorial bookplate of the Verne d'Orcet family at Château du Veuillin in Apremont-sur-Allier (Nivernais), whose great library on the subject of hunting was begun by Joseph du Verne d'Orcet (1865-1933) and his son Pierre (1892-1960), both hunters, and continued by the latter's daughter Nicole, Countess Charles de Bernis. With numerous mostly marginal tears (about 18 repaired with tape), a few running into the caption and about 5 into the print image, one leaf with browned margins and the last sheet cut down close to the plate at the head, fore-edge and foot, stitching holes from a previous binding in the gutter. Each leaf is a full sheet, but about 20 have been backed with half-sheets of 19th-century laid paper (watermarked: shell above CM or GM, apparently in both halves of the sheet, probably a few decades older than the binding). A rare complete set of a magnificent hunting print series, including falconry, printed ca. 1665/75 from the plates engraved 1578-ca. 1596. 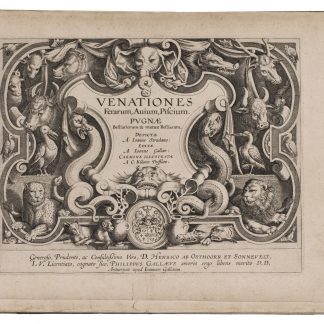