The falconer of King Henri IV

Very rare second edition, one year after the equally rare first edition, of one of the earliest French treatises on falconry and hawking, by Charles d'Arcussia (1554-1628), falconer to King Henri IV (and later to Louis XIII), who dedicates it to the king. "The work is much esteemed on account of its originality and the amount of information it contains" (Harting), "the outcome of long practice and an astonishing amount of research work in every subject connected with [Arcussia's] favourite sport [hawking]" (Schwerdt).

Jean Tholosan published the first edition at Aix-en-Provence in 1598, but the USTC records only 3 copies of each, all in French libraries except for a copy of the present edition at the Wellcome Library in London.

The six birds of prey illustrated are described as: De l'espece du faucon premier de noz oyseaux, Du Lanier Nyais, Du sacre, Du Gerfaut, De l'Emerillon and De l'Autour Nyais. USTC oddly notes that D8 is cancelled, but it is certainly present here, with one of the 11 engravings. The book went through about a dozen editions before 1650.

With an 18th century endleaf, a monogram stamp (ca. 1800) on the title-page, and a modern armorial bookplate of the Verne d'Orcet family, whose great library on the subject of hunting was begun ca. 1900. Washed and lacking F8 (supplied in a lithographic [?] facsimile on 18th century [?] paper), but that leaf contains only repeats of 2 engravings plus their captions and a 4-line verse, with no other text. Three other plates are slightly shaved, affecting the tip of one bird's tail (present in the repeat plate), the beak of another and a small bit of foliage in a third plate, a corner torn off 1 leaf (affecting one shoulder note), a small hole in another, a worm hole in the foot margin of the last few leaves and a faint water stain in the fore-edge margin of a few leaves. Still generally in good condition, the binding fine. Very rare classic of falconry and hawking. 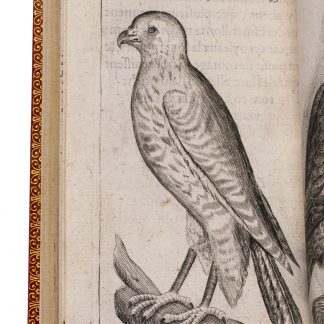