Hunting and Falconry: an early manuscript

Calligraphically appealing 16th century manuscript on the art and terminology of hunting and falconry, written by a professional scribe for an unidentified sponsor, though likely for a highly placed personage or member of the nobility in South-Western Germany. The manuscript contains contemporary extracts from the end of the third part of Noe Meurer's "Von Forstlicher Oberherrlichkeit und Gerechtigkeit", an important study of hunting first published in Pforzheim by Georg Rab in 1560, and then, in expanded form, in Frankfurt, by Georg Rab & Weigand Han, in 1561. Meurer (born ca. 1525 in Memmingen in Southern Swabia, died in Heidelberg in 1583) was one the first German legal scholars to write in his native tongue rather than in Latin; among his works are treatises on the law of inheritance and of water. In particular, he was the first German author to publish monographs on the subjects of forestry and hunting, not as mere chapters within the larger framework of agriculture, for which reason he was of great importance for the study of forestry in the 16th century. The present extracts comprise the only parts of Meurer's book concerned with the practical, technical aspects of hunting, rather than with its legal foundations. They include sections on hounds, canned and net hunting, the hunting of stags, roes, boars, foxes, rabbits, bears, wolves, ibexes and chamois, as well as a section on how to tell a deer from a roe when viewing the animal from the rear. The final part is dedicated to hunting with falcons and hawks. The entire section on deer ("Die Hürsch zu suchen, wie auch der Hürsch für der Hinndin zue erkennen etc.") is not part of the first edition of Meurer's book, suggesting that the scribe based his work on the second edition of 1561 (leaves LXXXIIII verso to XCVII verso). Yet the order of the individual sections does not follow the published book in all particulars, and the present arrangement would seem to reflect the scribal editor's or the sponsor's private considerations.

Very well preserved and legible, untrimmed manuscript from the collection of the Swiss-born German merchant and entrepreneur Hans Dedi (1918-2016), chairman of the "Quelle" mail order concern and the Schickedanz business group, with his bookplate in the marbled solander case and his gilt signet on the spine. 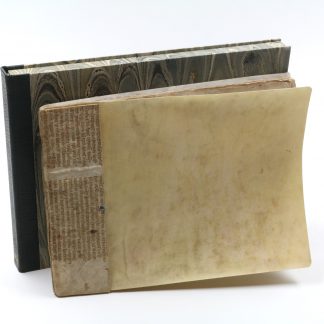