8vo. VI, 22 pp. With 4 chromolithographed plates showing 3 stained-glass portraits and an architectural elevation, 2 double-page etched views and a lithographed facsimile of a letter written and signed by Margaret of Austria. Half grey-brown cloth (ca. 1900?). With the publisher’s lavender printed paper wrappers bound in, repeating the arms of the title-page.

A remarkable bibliophile edition (limited to fifty copies) of financial accounts and other documents concerning hunting and falconry from the archives of King Charles VIII of France in the years 1485 to 1486. These documents are essential primary sources for the history of hunting and falconry, giving detailed and very specific data to throw light on falconry ca. 1485/86. The text was prepared in conjunction with a publication about Margaret of Austria (1480-1530), Duchess of Savoy, and Quinsonas (1818-1901) wrote a brief introductory chapter to the present book, “Documents pour servir a l’histoire de Marguerite d’Autriche”. The daughter the future Holy Roman Emperor Maximilian I, she was betrothed to Charles VIII in 1483 and came to the French court to be educated as the future Queen of France. He broke off the engagement to marry her stepmother for political reasons in 1491. So at the time of the book’s documents about Charles VIII she was still betrothed to him and living at the French court. After he broke off their engagement she married twice, the second time in 1501 to Philibert II, Duke of Savoy who died of pneumonia that he caught during a hunt in 1504. The chromolithographs show details from two stained-glass portraits of her, one of her husband Philibert and a view of her “tower” in his chateau in Pont d’Ain. The etchings show Pont d’Ain and Louis XIII’s chateau at Poncin. After Margaret’s brother King Philip I of Spain died in 1506, she became governor of the Low Countries for most of 1507-30. Although the title-page names no compiler and the imprint names only the printer, Quinsonas’s arms appear on the title-page and front wrapper. He was clearly the motive force behind the publication, using the services of the printer Louis Perrin, who pioneered historically allusive book design.

With a presentation inscription from the compiler Comte de Quinsonas to Mr [Louis] de Mas-Latrie (1815-97), historian and palaeographer, on the front wrapper. With an 1890 (?) bookseller’s ticket, the bookplate of Paul Couturier de Royas (1853-1934), and a modern armorial bookplate of the Verne d’Orcet family, whose great library on the subject of hunting was begun ca. 1900. With offsetting of the chromolithographs (in spite of the tissue guards bound in to prevent it), the ribbon marker has left a browned shadow in the gutter margin between 2 pages and the margins of the wrappers have faded to grey-brown, but otherwise in very good condition. A bibliophile edition of documents concerning King Charles VIII’s hunting and falconry in the years 1485-86. 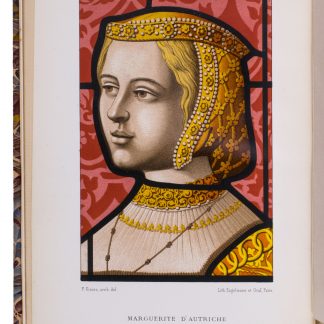