Original poster. 51.5 x 34.7 cm, one illustration in a box with titles in grey, signed 'DP' or 'PD' in a monogram in the stone, titles in black on grey, offset lithography. Old horizontal and vertical folds, a small tear on top edge (not affecting image), some trivial browning, worn through on one of the folds. A good, clean copy.

A captivating poster from a campaign that redefined the strategy of relief efforts in the 20th century.

When news of the atrocities committed by the Ottoman government against Armenians reached America in 1915, a group of salubrious New Yorkers banded together to form the American Committee for Armenian and Syrian Relief (named American Committee for Relief in the Near East from 1918-1919). After raising $60,000 for direct relief at their first meeting, the committee set about taking their cause to the public. The effort to do so centred around a media campaign of unprecedented ambition and modernity: one that utilised famous speakers, first-hand accounts from the Near East, and an array of visual media.

This poster was part of the imagery that inspired the American people to give over $116 million for direct relief between 1915 and 1930. The work of the committee also saved the lives of over a million refugees. It still exists today as the Near East Foundation and continues to provide support to over 40 countries in the Near East, sub-Saharan Africa, and the Middle East. 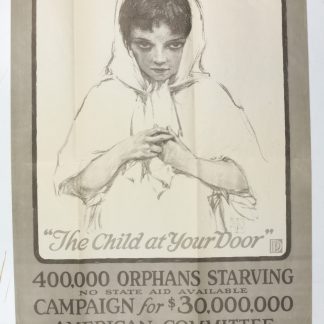