4to. (2), CX, 637, (1) pp. With 2 coloured plates (including a portrait frontispiece) and 184 black and white plates (1 of which not included in pagination). Original full cloth with giltstamped spine and spine-title.

Second edition of this important English translation of the famous Latin treatise on ornithology and falconry written in the 1240s by the Holy Roman Emperor Frederick II. It was prepared by the Canadian ophthalmologist and comparative zoologist C. A. Wood (1856-1942), who studied animal vision, especially that of birds, and was first published in 1943 by Stanford University Press. The plentiful illustrations include a portrait frontispiece of Frederick II, photographs of various decorative manuscript pages from "De arte venandi cum avibus", falconer's equipment, and landmarks associated with the Emperor, including Castel del Monte and his tomb in Palermo, as well as drawings and photographs of various species of falcons and hawks, and a map of southern Italy and Sicily showing the Emperor's castles and hunting lodges. 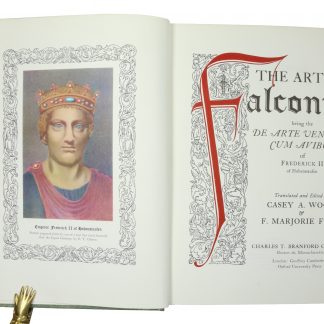