A hitherto unpublished genealogical work by the Belgian historian Jean Zuallart (1541-1634), best known for his great travelogue of a journey to Jerusalem. Written in his diminutive hand, the present manuscript gives the family trees of important historical personalities, rulers and noble families, including those of Adam and Eve, the Virgin Mary and Noah, Assyrian rulers and kings, the Babylonians, Egyptians and Romans, the dynasties and noble families of Italy, France, Austria, Tyrol, Bavaria, the Palatinate, Saxony, Brandenburg, Nassau, Swabia, Franconia, Spain, Portugal, Flanders, Antwerp, Brabant, and Lorraine, as well as the Goths and Vandals.

Zuallart's account of the Holy Land, which he visited in 1586 as companion and educator of a young nobleman, was first published in Rome in 1587 in Italian; it saw several reissues and translations and was often drawn upon by later writers. A selection of his work can be found in the Bibliotheca Belgica (V, 893-900), which also notes several manuscript works left behind by Zuallart at his death. One of them, kept at the Belgian Royal Library (MS. II 1001), was used to confirm Zuallart's handwriting. 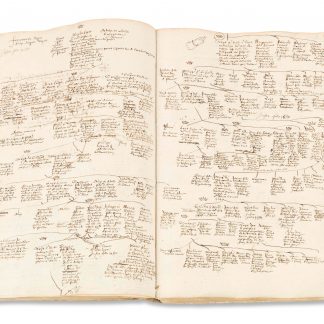