Unpublished French study of Islamic coins and medals, with about 157 drawings and engravings, many in colour

Mostly folio (315 x 210 mm). A manuscript compilation of loose leaves and bifolia, with about 104 drawings (some in ink; some in coloured gouaches, many including gold, silver and other metallic colours) and about 53 engravings (some black on white; some white on black), each drawing and engraving showing the obverse and reverse of an Islamic coin or medal (except for about 3 that show only one side). Most of the drawings and engravings are on slips attached to leaves with notes in Arabic and French.

An extensive study of Islamic coins, medals, and seals prepared on loose leaves and bifolia, with about 104 drawings (in ink or coloured gouaches, many with gold and/or silver and occasionally copper or metallic blue) and about 53 engravings, most drawings and engravings with manuscript notes in Arabic and French. Nearly every drawing and engraving shows both the obverse and the reverse of the coin or medal, some shown at the original size and some enlarged, so the diameter of the coins in the drawings ranges from about 1½ cms to about 10 cms, though even some of the larger ones note that they are drawn at the original size. Some of the ink drawings were made directly on the leaves, but nearly all of the colour drawings and engravings are on separate slips mounted on the leaves (some pasted, some with sealing wax, some with pins). The notes on these leaves usually give the dates of the coins (whether or not the coins themselves are dated) following the Islamic Hijri calendar and sometimes also following the Christian calendar. They often give a transcription of the inscriptions in a naskh Arabic hand (though they appear on the coins in several styles of Arabic script, including Kufic). A few include longer notes in French. The coins come from Egypt, the Ottoman Empire, Morocco, Algeria, Tunesia, Tripoli and elsewhere.

The dates given for the coins range from at least AH 93 to at least AH 1203 and probably to AH 1219 (712-1788 CE and probably to 1804/05 CE). The compilation of these drawings, engravings and notes probably began in the 1790s and may have spanned two or three decades. A few of the leaves (including some with drawings made directly on the leaves) show a paper stock with a watermark date "1791", and many leaves show a distinctive kind of watermark that was used in 1805. They frequently include abbreviated references to Jacob Georg Christian Adler, Museum Cuficum Borgianum velitris, Rome, 1782; Denis Samuel-Bernard, Mémoire sur les monnaies d'Egypte, Paris, 1809; and Description de l'Égypte ... État moderne, plates vol. II, Paris, 1817 (plates h-k show 127, 123 and 178 coins and medals), the last giving the earliest possible date for the completion of the compilation. Many of the engravings in the present compilation are taken from these three sources, and there is even what may be a proof of an unfinished plate from Bernard. One leaf has a mounted letterpress fragment with a biography of Ahmed ben Mohammed Khan, clipped from p. 67 of the 1776 Maastricht edition of Barthelemy d'Herbelot de Molainville, Bibliotheque orientale.

Although the manuscript nowhere names its compiler(s), Jean Joseph Marcel (1776-1854), grandnephew of the Consul Général in Egypt, was a brilliant student at the University of Paris, where he received many prizes in 1790 and 1791 and began his study of oriental languages. He came into contact with the orientalist Louis-Mathieu Langlés, who arranged for him to accompany Napoleon on his 1798 Egyptian Campaign (1798-1801), where he took charge of the Campaign's printing office (printing an Arabic type specimen in 1798), made the first steps toward deciphering the Rosetta Stone, and collected medals, manuscripts and inscriptions. Back in Paris he became director of the Imprimerie Impérial, a post he held until 1815. He wrote, compiled or translated numerous works concerning Arabic and other oriental languages. He may have planned to produce a publication based on the present compilation, but no such publication appeared. The compilation in any case shows Europe's new interest in Islamic studies after Napoleon's Egyptian Campaign, with Paris as its most important centre.

About 3 small drawings appear to have been made on oiled paper, probably in order to trace coins or engravings of coins, and a few are drawn on tissue paper. Many of the larger drawings are in colour, and a few are enlarged copies of the smaller drawings or engravings. Some leaves are tattered along the edges and a few have had their corners cut off, none of this affecting the illustrations or text. In a very small number the ink has corroded in the paper, more severely in 2 leaves, and one of the drawings on oiled paper has been cut up with 3 (of 4?) pieces surviving, but most of the leaves remain in good condition. A remarkable record of Islamic coins and medals, compiled ca. 1791-1817, with about 157 illustrations. 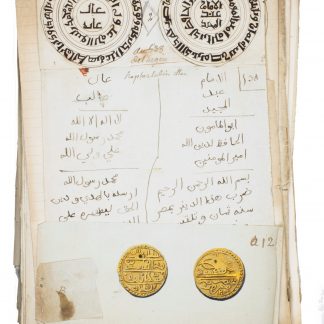