19 issues of the New-York Daily Tribune, each within a separate acid-free folder, stored together in a custom-made portfolio (48 x 62 cms).

A remarkable ensemble of 19 complete issues of the "Tribune", containing a total of 24 news summaries submitted by the paper's London-based correspondent, Karl Marx (sometimes co-written with Engels), including a dozen rare signed contributions. Marx had first met Charles Anderson Dana, the managing editor of Horace Greeley's powerful Republican newspaper "New-York Daily Tribune", in 1848, and three years later, Dana invited Marx, by then an exile in Britain, to join the paper as foreign correspondent. The arrangement provided Marx with much-needed income during a period of his life in which Engels could only provide limited financial support. It would also prove the philosopher's longest-lasting stable employment: between 1852 and 1862, Marx contributed some five hundred articles tackling an abundance of topics, from issues of class and the state to world affairs. The present articles, focusing on the European political upheavals of the time, are mostly written by Marx alone, and some in collaboration with Engels (while another was authored by Engels only). They span the months of January-April 1853 (9), April-November 1854 (7), December 1857 (1), and January-February 1859 (2), including: A Reply to Kossuth's "Secretary" (4 Jan. 1853); Political Prospects - Commercial Prosperity - Case of Starvation (2 Feb. 1853); Elections - Financial Clouds - The Duchess of Sutherland and Slavery (9 Feb. 1853); Capital Punishment - Mr. Cobden's Pamphlets - Regulations of the Bank of England (18 Feb. 1853); Defense - Finances - Decrease of the Aristocracy - Politics (23 Feb. 1853); Italian Insurrection - British Politics (25 Feb. 1853); The Attack on Francis Joseph - The Milan Riot - British Politics - Disraeli's Speech - Napoleon's Will (8 March 1853); Parliamentary Debates - The Clergy - Starvation (15 March 1853); British Politics - Disraeli - The Refugees - Mazzini in London - Turkey (7 April 1853); The European War - The War Debate in Parliament (17 April 1854); The bombardment of Odessa (16 May 1854); State of the Russian War (8 July 1854), The Details of the Insurrection at Madrid - The Austro-Prussian Summons - The New Austrian Loan - Wallachia (21 July 1854); The Spanish Revolution - Greece and Turkey (4 Aug. 1854), The War Debates in Parliament (7 Aug. 1854), The Campaign in the Crimea (27 Nov. 1854), Trade Crisis in England (15 Dec. 1857), On Italian unity (24 Jan. 1859), The Money Panic in Europe, Affairs in Prussia (1 Feb. 1859).

"Writing for the Tribune afforded Marx (and to some extent Engels, who worked in a few articles of his own) the unique opportunity to comment on world politics for a mass audience. Never before and never after had they so wide a readership as journalists: during the decade of the 1850s, the Tribune's circulation approached 150,000 copies, dwarfing even the Times [... Many of] the articles appeared unsigned, often as leaders or editorials. Flattering though it must have been that one of the world's foremost newspapers had - albeit temporarily - decided to adopt as its own Marx's views on European politics, the downside was that the journalism still published under Marx's name was of an increasingly inconsequential nature, until his name entirely disappeared from the news columns in April 1855 [...] The American public's interest in Marx's commentary on the international scene was subject to the fluctuations of U.S. attention to European affairs more generally: at its height during the Crimean War, it fully evaporated when the Civil War at home grabbed the headlines" (cf. Neuhaus).

A few tears to edges and corners professionally restored; very well preserved without loss to text. Marx's articles not affected by damage well-legible throughout. Extremely rare: a fine survival. 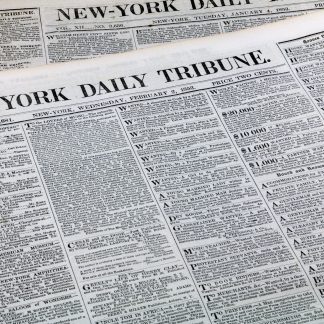