"The escapee Büchner has died"

Rare documents of political persecution in Germany's "Vormärz" period: two addenda to the 1835 escapee list published by the German police, containing signalments of a total of 63 wanted men. For each they state the occupation, charge, date of flight, probable location, personal description, and the date they were first posted as wanted. Charges include participation in "subversive societies", the 1833 "charge of the Frankfurt guard house", membership in fraternities, and "offences against censorship".

The lists of wanted men include several familiar names, such as the naturalist Ernst Dieffenbach, the theologian Karl Hundeshagen, the politicians Friedrich Ernst Schlutter and August Ludwig von Rochau, the historian Wilhelm Obermüller, and the educator Georg Geilfus, as well as a whole series of men from Georg Büchner's circle, including his friends Christian Kriegk, Hermann Wiener, Wilhelm Braubach, Carl and Gustav Soldan, the printer Carl Preller, the physician Carl Theodor Stamm, and the revolutionary Ludwig Rosenstiel. The persecution extends to Büchner's "Society for Human Rights", the literary group "Junges Deutschland", and participants in the 1832 Hambach Festival.

Büchner, who died in exile in Zurich on 19 February 1837, had already been cited in the original list of 1835. Here, the second addendum states that "according to official reports received, the escapees Büchner and Hahmann have died". Similarly, the deaths of Ludwig Börne in Paris and of the revolutionary Eduard Scriba in Liverpool are recorded.

Both the 1835 list and the present addenda from 1836 and 1838 are exceptionally rare: while KVK and OCLC cite four copies of the 1835 list (two each in the Austrian National Library and in the Landesarchiv Baden-Württemberg), a single additional copy is known of the 1836 addendum (in the Staatsarchiv Sigmaringen), and none at all of the 1838 addendum. 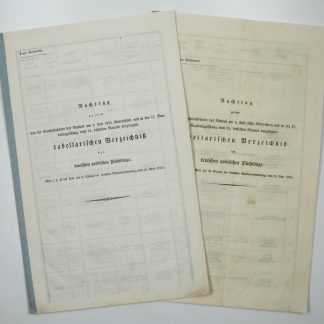