T. E. Lawrence's anonymous account of the Arab Movement in the Great War

[Lawrence, Thomas Edward]. Pirie-Gordon, Harry (ed.). A Brief Record of the Advance of the Egyptian Expeditionary Force under the Command of General Sir Edmund H.H. Allenby. July 1917 to October 1918. Compiled from Official Sources and Published by the Palestine News.

First edition, edited by Harry Pirie-Gordon as a souvenir album: an account of the 1917-19 campaign in the Middle East. Contains two reports written by T. E. Lawrence, "Sherifian Co-Operation in September" and "Story of the Arab Movement", in which he details the Ashraf contribution to the War effort and narrates his own involvement in a third-person report.

Rubbed and stained, with occasional edge flaws. Endpapers have pencil ownership of O. A. Holstius, attached to Headquarters, 19th Brigade, Royal Field Artillery. Loosely inserted is a typed extract from "The Honourable Artillery Company in the Great War, 1914-1919" by George Goold Walker (1930), detailing living conditions in the Jordan Valley during the Great War (torn and frayed at edges). 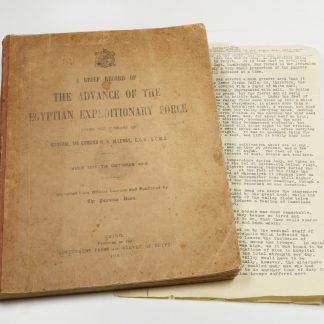