First edition of J. T. Reinaud's (1795-1867) rare catalogue of the famous collection of Islamic Art amassed by the French statesman Blacas. Most copies have title changed to "Monumens arabes, persans et turcs". This copy is inscribed by Reinaud to the Duc de Luynes, another famous French antiquarian.

The French antiquarian and diplomat Pierre Louis Jean Casimir, prince de Blacas d'Aulps (1770-1839) acted as prime minister to Louis XVIII when he succeeded Napoleon in 1814 and later served as French ambassador to the Holy See. Remaining in Rome for many years, he provided Ingres with a commission and became a patron to the German classicist Theodor Panofka. He worked closely with Italian archaeologist Carlo Fea in the excavation of the Roman Forum, supported the orientalist Jean-François Champollion and created the "Musée Egyptien" within the Louvre. In 1866, his descendants sold most of his collection to the British Museum, where it remains to this day.

The plates show beautiful specimens of Arabic calligraphical art (including many seals). Some browning and staining throughout. From the library of the Ducs de Luynes from the Château of Dampierre with bookplate to pastedowns. 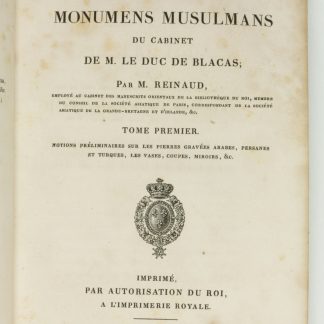