Description of Jamaican plants by the pupil of Linnaeus the younger's pupil, with 13 hand-coloured plates

Very rare first and only edition of an illustrated description of 13 Jamaican plants (13 illustrated with 1 plate each, but only the first 9 described) by the Swedish botanist Olof Peter Swartz (1760-1818), who had drawn some 200 plants during his travels through the West Indies. 71 of these drawings were destroyed in WWII. J.F. Volkart made 13 engravings after some of these drawings for the present publication (all showing Jamaican plants): in the present copy they are delicately hand-coloured with a subtle gradiation of tones. It was intended as part of the first fascicule of a much larger publication that would have contained engravings after all of Swartz's drawings, but the rest still remains unpublished today.

Swartz first published findings from his voyage to the West Indies in his Nova genera & species plantarum seu prodromus descriptionum (1788), which is not illustrated. He enrolled as a medical student at the University of Uppsala in 1778 (the year the elder Linnaeus died), studied under Carl Linnaeus the younger and graduated with a doctoral thesis in 1781. From 1784 to 1786 he traveled via North America to Jamaica, Puerto Rico, Haiti and Cuba and made a special study of the flora of parts of Jamaica that western botanists had not yet visited. On his return voyage, he stopped in London to study the collections of Banks and Linnaeus, comparing them with his own assembled material. After his return to Sweden he became a leading figure in Swedish botanical studies, in charge of the Hortus Botanicus Bergianus and professor of botany.

The title-page, dated 1794, says fascicule 1, and the table of contents, also explicitly described as fascicule 1, lists 25 numbered species, but the present copy contains all that was published: the descriptions for species 1-9 and one plate each for species 1-13. Fascicule 1 was intended for publication in two or more instalments. The first instalment, issued in 1794, includes the title-page (A1) and contents (A2) for the entire fascicule. One might think the first instalment covered species 1-9, and that plates 10-13 (intended for the second instalment) were added when further work was abandoned, even though no descriptions had been printed for them. Stafleu & Cowan, however, cites correspondence indicating that plates 1-6 were issued in 1794 and plates 7-13 in 1801, so it describes the work as two published instalments containing plates 1-6 and 7-13, and an intended third instalment, never published, that would have contained plates 14-25. But the nine descriptions appear on sheet B (pp. 5-8, though B2 is mis-signed "A2"), with the description of species 5 beginning on B1v and concluding on B2r, so the nine descriptions could not have been issued in two separate instalments. In any case, the descriptions of species 10-25 and the 12 plates for species 14-25 never appeared. 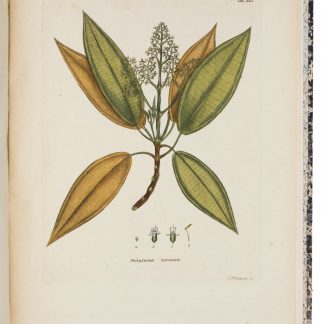