Teixeira, José / Munday, Anthony (transl.). The Strangest Adventure That Ever Happened. Containing a discourse concerning the successe of the king of Portugal Dom Sebastian, from the time of his voyage into Africke when he was lost in the battle against the infidels, in the yeare 1578, unto the sixt of January this present of 1601.

First English edition of this rare work, containing an account of the failed invasion led by the young king of Portugal, Dom Sebastian, to the north of Africa, his defeat and death, and the political unrest that ensued.

Sebastian, the 24 year-old King of Portugal, invaded Morocco in 1578 with an army of 18,000 men. The army was crushed by the forces of Marwan Abd al-Malik I Saadi at the battle of Alcacer Quibir and King Sebastian was killed. The fact that he had left no successor paved the way for a series of impostors claiming the throne, only to be captured and executed (ultimately, the Spanish king would accede to the throne of Portugal). Teixeira's work narrates the machinations of the fourth such impostor, a Calabrian by the name of Marco Tullio. 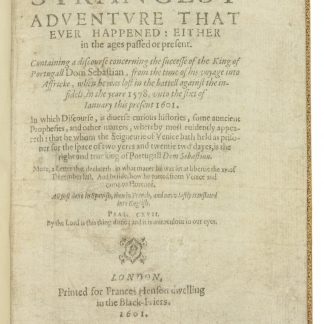