[Hejaz Railway]. Road and rail map of Syria and Lebanon.

Large-format Ottoman map of Palestine and Syria produced shortly before the First World War, including Eastern Anatolia and Cyprus as well as the northern Sinai Peninsula. Vilayet divisions are given in red, roads and rail transportation ways are indicated in detail. A separate inset shows the Hejaz Railway with tracks running as far south as Medina and various projected but never-realized extensions southwards to Mecca.

Traces of one old vertical and three horizontal folds; light brownstaining at centre and lower edge. A rare survival. 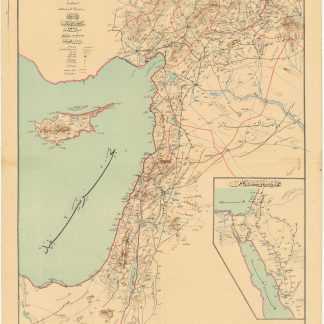