Simpson, William / Kaye, John William. India Ancient and Modern. A Series of Illustrations of the Country and People of India and Adjacent Territories.

A fine set of Simpson's views of India, monumental even in the reduced form in which the financial circumstances of the times forced the publisher to recast the work, originally planned to comprise five times the present scope.

Famed for his pictures of the Crimean war theatre, Simpson was commissioned to illustrate a work on India that was to rival David Roberts's "Holy Land". He arrived in Calcutta in 1859 and joined the party of the Governor-General, Lord Canning, on a tour of the area where the mutiny had taken place. Over three years he visited much of the subcontinent, including the Himalayas, Kashmir, Ceylon, Tibet and its Buddhist temples, and upon his return submitted 250 watercolours to his publishers. However, in the wake of the Panic of 1866, the wealthy English patrons and subscribers on whom Day & Son had banked shrunk away from so costly an undertaking, and the publisher - already under pressure since cheaper wood engravings had turned chromolithographs into a luxury - issued a series of merely 50 chromolithographed plates. Simpson's original watercolours, much to the artist's chagrin, were ultimately sold off as bankrupt stock. The work remains a magnificent achievement, presenting a detailed and wide-ranging representation of India immediately after the Sepoy Rebellion.

Light spotting to tissue guards; some plates lightly soiled in the margins with very occasional fraying to edges. Bindings professionally repaired and sympathetically rebacked with the original spine laid back. Removed from the Library of the Birmingham Assay Office, one of the four assay offices in the United Kingdom, with their inconspicuous library stamp to the flyleaves. Very rare: we have traced only three other copies of this work at auction in nearly 50 years. 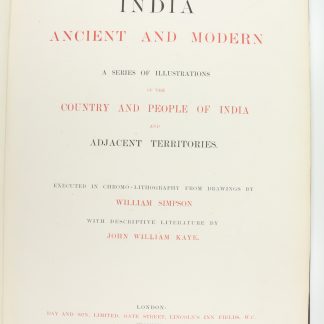