Folio (212 x 333 mm). (2), XIII, 91 pp. With 29 full-page plates (of which 20 folding) including dozens of coloured maps, as well as a very large folding "Map of the world showing existing and proposed air transport routes" housed in a custom pocket on the inside rear board, as issued. Original printed grey boards with blue cloth spine.

Sole edition of this large-format, pivotal early document in the development of international air travel - complete with all 29 plates and the often-lacking loose map. The principal concern of the British during this period was accelerating air transport between the vast reaches of their empire - and chief among these was the lengthy journey to India, via the Middle East. As noted on p. 5, the maximum range of commercial aircraft in 1926 was a mere 400 miles; perhaps partly for this reason, the existing and proposed air routes include numerous stops for refueling in the oil-rich regions of Syria, Iraq, and Iran.

The stated aim of the Air Ministry was in fact to reduce the journey to India to just 5 days (p. VI), and although bold proposals are put forward and illustrated for giant "airships" with a range of 4,000 miles, the then-current technology limited aircraft to a designated route along the northern coast of the Arabian Gulf. Facing the challenge of "the extreme heat and the height of the Arabian Plateau, both of which tend to reduce the load with which an aeroplane can rise from the ground" (p. 9), the route is amply illustrated on numerous folding maps, from Cairo via Gaza, Rutbah Wells (Iraq), Baghdad, Basra, Bushire, Bandar Abbas, Chahbari, Pasni, Karachi, Hyderabad, etc.

Other chapters cover fascinating proposals for "major air routes" between Ottawa, London, and Kingston, Jamaica; "the use of wireless in air traffic communications" (p. 62); early air routes in Australia and the United States; and so on. The plates include designs for proposed experimental "airships"; photographs of early airports, and maps of meterological phenomena. Particularly interesting is the "Map Showing Areas in Which Main Imperial Airship Routes Will Probably Develop" (facing p. 74), which indicates that alongside the Transatlantic route, the coasts of the Arabian Gulf (but not the interior) as well as the coasts of Africa will be the next targets of development. 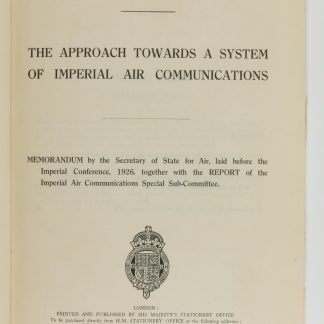 You're viewing: [Air Ministry]. The Approach Towards a System of Imperial Air Communications. Memorandum …London, 1926. € 2,800.00
Add to cart