[Renaissance mercenaries]. Dedication manuscript for Emperor Ferdinand I, written by the provost of a Landsknecht army who fought against the Turkish troops of Sultan Soliman II between 1532 and 1552.

The as yet unidentified writer of this manuscript had until 1552 served among the staff of Maurice, Elector of Saxony, and thus was one of the commanders in the Imperial Landsknecht army led by the Elector. Holding the rank of an "oberster provossen Leutnant" (head lieutenant provost), his duty had been to enforce military order among the mercenary regiment: he investigated and arrested lawbreakers; in trials he acted as prosecutor, and afterwards he executed the punishment. After the end of the campaign, the provost would no longer be protected by military law, for which reason he would usually leave the regiment early so as to escape acts of revenge by the soldiers. After more than 20 years of Imperial army service, our provost was thus without occupation or pay, and so in 1560 directly applied to the Emperor in the present, strongly autobiographical manuscript, requesting (in the 146th and final chapter) that he graciously bestow on him a benefice or sinecure ("aus lauterer genaden mit ainer genetten Pfründt oder schlechten Ofidicio oder Beneficij"). Obviously aware of the difficulties of his appeal, the author states in the preface that even if granted a personal hearing, he would hardly be permitted to present his case in such detail ("gibt ainem nit sovil audienz, biß Er sein wichtige sachen khann genuegsamblich fürbringe"), which is why he has decided on the written form. He is not a learned man, nor does he have an eloquent scholar ("ain doctor der wolreden khann") at his disposal to help him with his phrasing, but even a simple man has memory and brains enough to thus lay down his opinions. His extensive descriptions of personal involvement in important, historically documented battles against the Turks permit a precise dating of the manuscript. The writer participated in the campaign against the Raab fortress ("ungeverlich vor 8 Jahren mein gnediger Herr Herzog Moritz Curfürst [...] biß für Rab Innß Landt zue Hungern ist gezogen") and fought against the Turks at Steinfeld as early as 1532 ("bin auch dabey gewesen, wie man dazumal ein streifenden Haufen mit Türggen an der Schwarzach geschlagen hat [...] da Herr Sewastian Schertlin Obristen Leitnanbt war"). This Imperial mercenary probably remained in the regiment of the famous Landsknecht commander Sebastian Schertlin von Burtenbach (1496-1577), victor of the battle at Steinfeld and a participant in the 1527 Sack of Rome, until the mid-1540s. He also remarks on the desolate condition of the contemporary military, straightforwardly addressing the issues of corruption among the upper echelons ("wie die falschen blinden Namen C. May. so grossmechtigen schaden bringen"), poor pay ("wie die Armen Kriegsleuth über vortailt und genediget werden mit der schlechten Müntz"), and grievances regarding enlistment, food, and clothing, and advances suggestions on how to improve matters ("so man auf allen Musterungen mieglichen Vleiß fürwendt guette kriegsleuth zue bekommen").

The manuscript begins with the index ("Register diser Oration oder Solticitation"); the counter-leaf of the first index page is glued to the vellum cover, forming the front pastedown. The index is immediately followed by the preface to the Emperor, the "Allerdurchleuchtigste Großmechtigste unnd unyberwindlichsste Erwelte Romischer Kayser aller genedigster Herr", which in turn is followed by the 146 chapters of the petition. Both the fact that the manuscript remained unsigned and also its provenance suggest that the author ultimately lacked the courage to submit to Ferdinand this manuscript, a work remarkable for its strongly autobiographical character as well as for its candid criticism of the Imperial military.

From the collection of the Austrian Minister of War, Count Theodor Baillet de Latour (1780-1848; hanged by revolutionaries), with his armorial bookplate on the front pastedown. 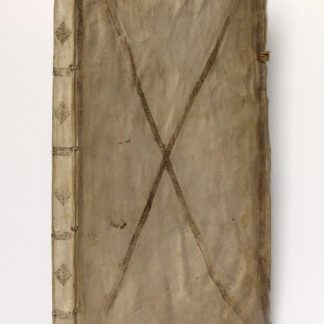 You're viewing: [Renaissance mercenaries]. Dedication manuscript for Emperor Ferdinand I, written by the provost of …No place, 1560. € 25,000.00
Add to cart