A Defence of Leachman's Assassin

First edition. A fascinating apology of Sheikh Dhari, who killed the British intelligence officer Gerard Leachman on 12 August 1920. It includes brief but detailed biographies of both men (that of Leachman includes his travels to Arabia and Iraq), an exposition of the acts leading up to the event, and an account of the day itself. Though the book links Sheikh Dhari's act to the Iraqi revolt of 1920, records of his trial signal that the killing was not politically motivated in the wider sense, but was instead committed in response to abuse suffered at the hands of Leachman (see Abbas Kadhim, Reclaiming Iraq, University of Texas Press [2012], p. 80). Leachman's legacy, like those of so many British Officials operating in the Middle East at the time, is complicated: multiple descriptions tend toward painting "a courageous and devoted servant of empire" (ODNB), whereas recent assessments rightly factor in the evidence of his abuses.

Arabic text throughout save for English title to recto of final leaf and lower wrapper. Occasional tiny edge chips; wrappers a little dusty and fingerstained showing minor wear to head and tail of spine, otherwise very good. Rare: Copac/Jisc locates a single copy in the UK (Oxford); WorldCat adds two further holdings at the Bavarian State Library and the University of Haifa. No copies in North American institutions (Harvard and Princeton have microfilm copies in their Arabic collections). 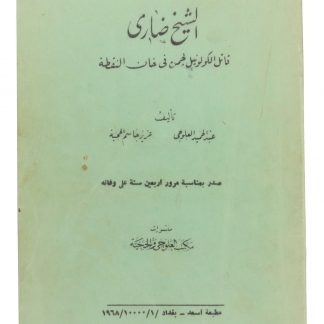