"The singularly wild nature of the country and people"

Durand, Algernon [George Arnold]. The Making of a Frontier. Five Years Experiences and Adventures in Gilgit, Hunza, Nagar, Chitral, and the Eastern Hindu-Kush.

First edition. "The book is a plain and unvarnished tale of the experiences of a frontier officer in times of peace as well as in those of war" (preface, p. IX).

Algernon Durand (1854-1923) was military secretary to the Viceroy of India and one of the earliest members of the Central Asian Society. He "found his métier as a soldier when he was appointed to command the troops in the brilliant little Hunza Nagar campaign in 1891, when he was wounded. He was then district commander at Gilgit. His [...] much read book, 'The Making of a Frontier', [...] is just a thrilling tale of happenings in that remote corner of the Empire at that time. He possessed the family gift or writing a clear and graphic account of his experiences, and it may be doubted whether any book written since is of greater value in describing the singularly wild nature of the country and people with whom he had to deal" (Obituary, JRCAS 11 [1924], p. 114).

Binding somewhat rubbed. Light brownstaining throughout; a faint waterstain to the portrait; inner hinges professionally repaired. Untrimmed copy with blindstamped presentation by the publisher on title-page. With accurate pencil underlinings and French annotations throughout, as well as numerous additions to the index, expanding the number of references to "Slave trade" from two to ten. 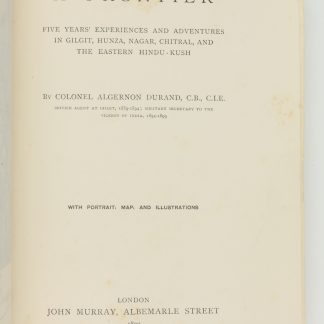 You're viewing: Durand, Algernon [George Arnold]. The Making of a Frontier. Five Years Experiences and Adventures in Gilgit, …London, 1899. € 950.00
Add to cart