Exceedingly rare Turkish translation (by Ahmed Sükrü) of the popular account of the 1873 Russo-Khivan war and the fall of the Khivan Khanate by the American war correspondent MacGahan (1844-78), first published in New York in 1874 as "Campaigning on the Oxus and the fall of Khiva". After a daring journey through the Kyzil Kum desert, MacGahan joined the Russian commander Konstantin von Kaufmann’s army on the banks of the Amu Darya. In his report he vividly describes the fall of the Khanate to three Russian columns reaching it from North and East. The book discusses the situation of Kazakh (misleadingly called "Kirghiz") and Yomuk Turkmen nomads, Uzbek and Sart settlers, as well as of Persian slaves, and includes a report on earlier failed Russian attempts to conquer Khiva. While MacGahan is impressed by the beautiful gardens and orchards of the Khanate, he is disappointed by the city of Khiva, the capital and main residence of its ruler. Even the Khan's palace, in which he is allowed by the Russian authorities to spend a few days, including a visit to the treasury room, strikes him as unspectacular. The illustrations, based on designs and paintings by artists and Russian officers, including Vereschagin and Feodoroff, show portraits, scenes of rural and nomad life, somewhat stereotypical depictions of locals, as well as buildings, army generals, and battle scenes.

While the original English edition occasionally appears at auction, the Turkish edition has never been seen on the market.

A few crayon annotations and underlinings in a contemporary hand. Binding slightly bumped at extremeties. Paper evenly browned and brownstained throughout; a few pages somewhat waterstained in the second half of the volume. 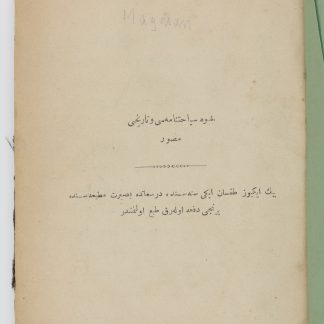