First edition. Attractive specimen of imperial representation (commissioned through the University of Vienna as a thesis for Joseph Julius Hörmann) commemorating the 900th anniversary of the Holy Roman Empire. The publication features brief biographies of the monarchs from Charlemagne to Leopold I, as well as nine magnificent triumphal arches, those for Rudolph I of Habsburg and Charles V constituting two of the most splendid examples. The engraved title shows a triumphal procession for Leopold I, featuring the Emperor on horseback, led by a group of angels and warriors as well as by Christ himself. The engravings were created by Johannes Andreas Pfeffel, Johann Ulrich Kraus, and Christian Engelbrecht. A second edition, more common than the first, appeared in 1725. 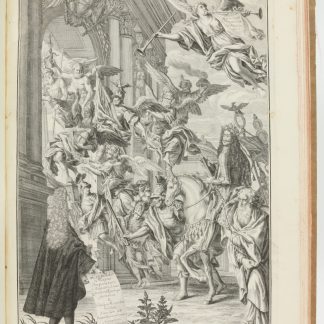