Top Secret: the 1943 Los Alamos lectures on nuclear physics, owned by a member of the Manhattan Project

Original pre-publication mimeograph script of lectures on nuclear physics, delivered at Los Alamos between 14 September 1943 and 2 March 1944 by various members of the scientific team responsible for developing the atomic bomb. Like everything generated at Los Alamos, their contents were classified at the time they were delivered. They bear no formal imprint and are identified on the front sheet for security reasons only as "LA report 24" (as indeed, Los Alamos did not officially exist). Mimeographed copies such as this were prepared on site in very limited numbers for use of the scientists involved and possibly other members of the Manhattan Project. Of the few copies issued, most were probably destroyed for security reasons before the lectures' declassification in October 1945; they were officially published by the US Government Printing Office in 1947.

The binder's upper cover bears the contemporary label "Nuclear Physics 1946" and the owner's label "J. H. Irving, Grad. Col., Princeton N.J.". The physicist John "Jack" Howard Irving (1920-2008), who worked at MIT’s Rad Lab during WWII, later helped develop the first airborne digital computer for fighter aircraft, and is best known for his work for the Aerospace Corporation, completed his MA in Physics at Princeton between 1946 and 1948 under the Manhattan Project scientists Walter Kauzmann (1916-2009) and Eugene Wigner (1902-95). It is likely that the lecture script was given to Irving by one of these men - probably Kauzmann, who had returned from Los Alamos to Princeton in 1946, a year before Wigner, and might well have loaned or presented to Irving, newly embarked on his MA in physics, his copy of the groundbreaking Los Alamos lecture series which has just been de-classified but not yet published.

Perfectly preserved with numerous handwritten ink and pencil annotations and corrections, mainly in Irving's hand, but also by another scientist, possibly Kauzmann himself or by another student who may have shared the book with Irving. Extremely rare: only eight copies in academic libraries; only three are known to have surfaced at auction. 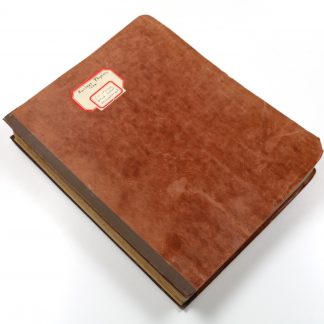