A circular world map centered on the Middle East

Only edition of this early, important source book for the history of the crusades and the Kingdom of Jerusalem and its vassal states. The second parts contains the first printing of the much sought-after 14th century maps and plans by the Genoese cartographer Pietro Vesconte, previously available in manuscript copies only. "Four of the maps from Marino Sanudo's early fourteenth-century manuscript atlas were reprinted by Johann Bongars in 1611. Sanudo's planisphere [...] is one of the few examples of medieval maps based on portolano sources in printed form. It is a circular map centered on Jerusalem with the Mediterranean relatively well defined. The ocean surrounds the whole of the known world, the outer parts of which are represented by conjecture. The authorship of Marino Sanudo is not definitely established and the original manuscript has also been attributed to Pietro Vesconte" (Shirley).

One of two title variants differing only in slight changes in the typesetting (here: "Expeditionum" begins between the "O" and the "R" of "Orientalium"). Binding somewhat rubbed, hinges starting. Rather severely browned throughout due to paper stock, some waterstaining to margins, more pronounced near the end, sometimes reaching into the printed text. Stains to first title-page; the second title and its counter-leaf *6 are printed on different paper stock. Some light worming, mainly confined to margins but also touching the text near the end; occasional edge defects. A copy in modern half vellum (severely browned, with some worming, but otherwise complete) commanded 13,000 Euros at Reiss's spring 2009 auction. 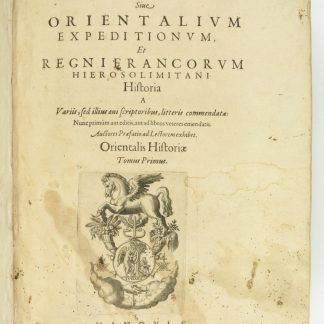