Working copy of the official plan

Impressive plan of the excavation site of Tell Halaf (now on the Syrian-Turkish border), the location of the great ancient Aramaean town of Guzana, and one of the most important archaeological revelations of the modern era. Then in the Ottoman Empire, it was discovered in 1899 by the German diplomat Max von Oppenheim (1860-1946) while travelling through northern Mesopotamia on behalf of Deutsche Bank, working on establishing a route for the Bagdad Railway.

This is a working copy of the official, authoritative plan of the site produced during the 1911-13 excavation led by Oppenheim, printed at Tell Halaf for the use of the senior archaeological team. Signed in the upper right-hand corner by Theodor Dombart (1884-1969), a professional architect and one of Oppenheim’s principal associates, later an esteemed professor of ancient Middle Eastern architecture and an authority on Munich history. 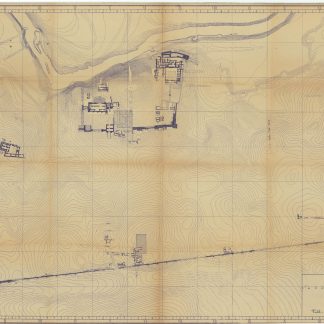