The finest Staufian document ever seen in the trade: the last Staufian emperor confirms a document by his grandfather

Extremely rare, exceptionally well preserved ceremonial document, lost since 1782. At the request of abbot Conrad, Emperor Frederick II confirms the privilege granted to St Paul's Abbey, Lavanttal, by his grandfather Frederick Barbarossa on 19 March 1170, in which the latter bestowed his protection on the monastery, awarding it sole tenure of Völkermarkt, and specifiying rules regarding the Abbey's stewardship and against enfeoffment. This privilege was intended to protect the economic power of the monastery from regional forces in the difficult times of the early 12th century. Frederick II confirms this privilege, additionally authorising the Abbey to use all silver, lead, and iron ore mines within its demesnes - a very important right in the Alpine area of the early 13th century.

This is a typical and perfect example of Frederick's ceremonial documents. Palaeographical analysis confirms that it is written by the scribe Iacobus de Catania, as Klaus Höflinger had long suspected without then having access to the original; several ornaments were clearly contributed by the notary Iohannes de Lauro, while other elements are the work of anonymous helpers in the chancery. The unambiguous identification of two principal chancery officials from the early years of Emperor Frederick II proves the document's authenticity, which is further underscored by the use of a seal typarium first attested in March 1226, probably created soon after the marriage between Frederick II and Isabella, heir to the Kingdom of Jerusalem, on 9 November 1225. Only the border of the seal has been chipped away on the left and bottom, but the inscription remains well legible in oblique lighting. The seal is thus one of the very earliest to name Frederick as King of Jerusalem. Frederick holds special relevance for the history of the Crusader state due to his Fifth Crusade, a venture undertaken without enthusiasm and brought to an end not by military means, but, uniquely, through a peace treaty with the Sultan in 1229. Only a very small number of well-preserved seals of Frederick survive from this period. In spite of its defects, this is one of the best early impressions of typarium 9.

The document was hitherto known only in two copies: in a notarial instrument from 1442 by the notary Urban Peinsteiner, issued at the orders of abbot Johann I Poschenbeuter (now in Vienna's Haus-, Hof- und Staatsarchiv), the Imperial confirmation privilege is inserted, together with a description of the seal, but it lacks the signum line as well as that of the inserted Barbarossa document. An original transumption for Ferdinand II from 1625 (in the archives of St. Paul's Abbey) cites both signum lines as well as the rulers' monograms. These copies are both based directly on the present original.

The document was missing without a trace at least since the monastery was dissolved by Emperor Joseph II in 1782/87. That this important document, preserved in such fine condition, has now resurfaced from a private collection is to be regarded as nothing less than a sensation: for decades no ceremonial diplomas by Emperor Frederick II have been seen on the market. The only other example, a ceremonial diploma by Frederick II, sold from the Adam collection by Tenner in 1980 (sale 126, lot 127: 19,000 German Marks, to H. P. Kraus), was in poor condition and lacked the seal. In similarly poor condition and also without the seal was the Frederick Barbarossa document which commanded 160,000 Swiss francs before premium and taxes at Stargardt's 2003 Basel sale (lot 30). The cataloguers were then able to trace in the previous century of trade no more than nine documents by any emperor from the Saxon to the Hohenstaufen period.

The present document has been examined by Professor Dr Mark Mersiowsky of the University of Stuttgart, editor of the documents of King Henry (VII), the son of Frederick II, for the Diplomata series of the MGH, and we are indebted to him for the description. 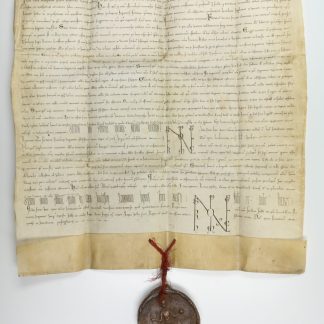