[Logbook of HMS Effingham in the Gulf]. Larken, Francis Wyatt Rawson, Royal Navy officer (1911-1985). Unpublished manuscript journal of a British voyage to the Gulf, containing a hitherto unrecorded account of a meeting with the Rulers of the Emirates.

A unique primary source, and a rare privately owned, unpublished Western document about the Middle East: the manuscript journals of a British Navy officer's tour of the Gulf in the early 1930s, including a richly detailed account of a visit to Dubai and an on-board reception of the Trucial Sheikhs on 17 December 1930. While not enumerated individually, at the time these were Sheikh Shakhbut bin Sultan Al Nahyan (1905-89) of Abu Dhabi, Sheikh Saeed bin Maktoum Al Maktoum (1878-1958) of Dubai, Sheikh Sultan bin Saqr Al Qasimi (d. 1951) of Sharjah and his cousin Sheikh Sultan bin Salim Al Qasimi (1891-1951) of Ras al-Khaimah, Sheikh Rashid bin Humaid Al Nuaimi (1902-81) of Ajman, Sheikh Hamad bin Abdullah Al Sharqi of Fujairah, and Sheikh Ahmad bin Rashid Al Mualla (1904-81) of Umm Al Quwain.

The keeper of the journals, the 19-year-old Acting Sub-Lieutenant Wyatt R. Larken, proves himself a shrewd observer throughout - indeed one who in his youthful candour straightforwardly commits to paper the political and cultural biases of his class which a more experienced officer might have chosen to couch in more diplomatic terms, thereby sometimes revealing Britain's contemporary colonial attitudes with unexpected frankness.

Perhaps most interesting of all is his account of the Sheikhs' visit on board the HMS Effingham, a Royal Navy heavy cruiser just returning from Abadan: "At 1020 the Trucial Sheikhs and their followers numbering in all some 200 came onboard. The object of this visit is to impress the Sheikhs with the might and length of the British Navy's Avenging Arm! The truce which they hold with the British Government and which binds them to peaceful ways is sometimes overlooked by them and though it does not so much matter their fighting among themselves it becomes more serious when they interfere with white men. This is especially vital at the moment as we are preparing an Indian Air Mail Route down the Arabian Gulf of the Persian Gulf for when our agreement with the Persian Government comes to an end it will in all probability not be renewed".

Larken goes on to describe how the Sheikhs, whose descendants would shake off British dominion and rule independent Emirates within a little more than four decades, are given a tour of the battleship: "There were some 8 or 10 of the higher cast on board and these were taken round the ship by the Admiral and the Captain while their followers stayed on the Q[uarter] D[eck]. A torpedo was fired - also a full charge round from a gun. This they watched from the Bridge and having all been supplied with cotton wool and having stood with fingers in ears they remarked afterwards 'What do you want cotton wool in your ears for.' This was of course not at all according to drill but the situation was dealt with by the Captain who said 'If you had been at the Gun you would not have liked to be without it.' They all then congregated on the Q.D. where the band played. They then left in their respective barges - ornate and rather splendid motor dhows, the various Sheikhs receiving salutes the number of guns ranging from 6 to 1 in ratio to their importance. They brought us gifts of Beef and Melon Jelly (neither of particularly sanitary appearance) and they were sent away with Gold Flake Cigarettes and chocolate. Every man carries his broad curved belt knife - heavily set with worked silver - and the chief ones wore splendid 'Bournous' of gold work cloth. All were fine upstanding men very much like the Sheik of fiction […] In the evening a searchlight display was given for the further impressment of the Arabs".

The Effingham's cruise of the Arabian Peninsula and the Gulf lasted from 21 October to 19 December 1930. During this time she visited Aden, Muscat, Sohar, Sur, Khasab and Khor al-Jarama in modern Oman, as well as Dubai and the island of Sir Abu Nu'ayr in what is now the UAE. Larken's log for this leg of the journey occupies more than 50 pages, which also include accounts of a lecture received on drilling in the oil fields of the Anglo-Persian Oil Company, of a short trip through the swelteringly hot Elphinstone Inlet (Khor Ash Sham), of a visit to the Sheikhs and Wali of Khasab, and of another to the Sheikh of Dibba ("a remarkable figure of a man tall and holding himself very well - it is said that a short while ago a white died mysteriously in his territory, an event with which his name is connected"). The charts and plans include the Gulf of Aden, the Shatt al-Arab, the "Area cover’d by Interests of Anglo-Persian Oil Co", and route charts of the Effingham's sea passages, with the "Persian Gulf Cruise" on a separate chart. There is also a good photograph of the Effingham anchored at Basrah. The remainder of the volumes covers Larken's service on the battleships Valiant, Malaya, Queen Elizabeth, and Viceroy throughout the Mediterranean, off East Africa (Ceylon, Mauritius, Tanzania, Zanzibar, Mombasa, the Seychelles, and the Maldives), as well as in Burma and the Andaman Islands.

4) A collection of 6 printed books from Larken's personal naval library, including "H.M.S. Theseus Goes East" (Portsmouth, 1951), this copy dedicated to Larken as commander and executive officer; and the Admiralty's "Regulations and Instructions relating to His Majesty's Service at Sea" (London 1806), previously owned by the Royal Navy commander Alexander Milner (active 1795-1812) with his signature on the title-page.

Wyatt Larken was the eldest son of Admiral Sir Frank Larken (1875-1953). After service as a midshipman he was promoted lieutenant in 1933, commander in 1944 and captain in 1950. He saw WWII service on seven different vessels and shore establishments, and during the Korean War commanded the aircraft carrier Theseus and the minelayer Apollo. From 1952 until his retirement in 1955 he was deputy director of naval ordnance.

Provenance: acquired from the Larken family. 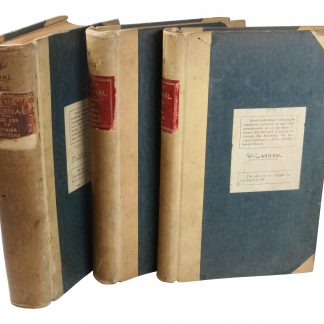