Uncommon second edition of this classic Arabic dictionary, al-Jawhari's "Tag al-luga was-sihah al-'arabiya" (The Crown of Language and the Correctness of Arabic), translated into Turkish by Muhammad al-Wani (d. 1592), deriving its title from the Turkish genitive form of the author’s name, Wangulu or Vankulu.

Jawhari himself reached only the letter Dad before he died in an unsuccessful attempt at human flight from the roof of a mosque in 1003 AD (the work was subsequently completed by his student Ishaq Ibrahim bin Salih al-Warraq). To this day the dictionary remains an indispensable companion of Arabic philologists in both the East and the West; "manuscripts are to be found in almost every library" (Brockelmann). "In this great dictionary [the author] codified pure Arabic as based on the criticism of his predecessors' preparatory studies as well as his own experiences and collections. The 'As-sihâh’ is arranged in an alphabetical order, according to the final, and not the first, rooter of the words [...] This system, which was later adopted by other large Arabic dictionaries, attempts to supply those in search of rhyming words with a handbook" (Goldziher, A Short History of Classical Arabic Literature, 1966, p. 70).

Dampstains at end of vol. I and intermittently to vol. II, minor staining to fore-edge. A few scuffs and rubs to binding, but a sound and imposing set, generally clean internally.

Provenance: from the library of the British diplomat and linguist Sir Gore Ouseley (1770-1844), first baronet, with his contemporary signature to the front flyleaf of each volume. Ousely travelled to India in 1787 and established a cloth factory. He lived a relatively solitary existence and spent his leisure time studying Persian, Bengalese Hindi, Arabic, and Sanskrit, becoming an elegant speaker and writer of Persian. An acquaintance of the oriental scholar Sir William Jones, Ouseley was named ambassador extraordinary to the court of Fath Ali Shah in Persia in 1810, negotiated several treaties, and returned to England. He was one of those responsible for the founding of the Royal Asiatic Society in London in 1823 and was associated with the formation of the oriental translation committee, of which he was elected chairman. He became president of the Society for the Publication of Oriental Texts, formed in 1842. 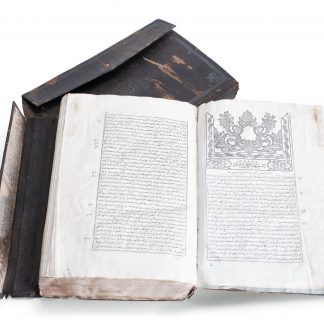