First edition. "A Syriac-Latin lexicon of Classical and New Testament Syriac, the second such after that of Masius [1571]" (Smitskamp). This surprisingly copious dictionary was edited by Giovanni Battista Ferrari (1584-1655), who not only taught Hebrew at the Collegium Romanum for nearly three decades, but is also known as a botanist of some repute, in whose honour the Iris species "Ferraria" is named. The title woodcut shows the arms of Cardinal Alessandro Orsini, to whom Ferrari dedicated his effort. 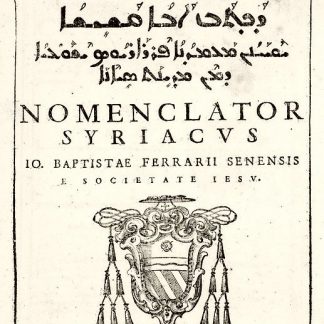