Unique collection of rare autograph documents by four prominent writers in Hebrew and Zionist leaders, the most extensive being an autograph manuscript signed by the children's author and poet Levin Kipnis (1894-1990), winner of the 1978 Israel prize. Originating from the early days of his career, it comprises a series of 5 poems, a prose work, and an epilogue, the final poem with an accompanying ink sketch of a seascape and a drowning person. With publisher's ink stamp (19 Nov. 1909).

Autograph postcard signed by Alter Druyanov (1870-1938) in Odessa to the poet Jacob Cahan in Geneva about his lyric work. With printed letterhead (1912). At that time, Druyanov was the editor of the weekly news bulletin "Haolam", founded in 1907 by Nahum Sokolow as the central organ of the World Zionist Organisation, published in Berlin in its first year. However, since the Zionist Executive considered it a burden on the budget and Western Europe did not appear to be the best place to publish a Hebrew journal, it was moved to Vilna in 1908, where it became the organ of the Zionist Organization in Russia, under the editorship of Alter Druyanow. In the spring of 1912, upon the initiative of Menachem Ussishkin, "Haolam" was moved to Odessa and continued its publication there until the outbreak of World War I.

ALS by the Zionist leader and writer Nahum Sokolow (1859-1936), pioneer of Hebrew journalism, to the head of the Jewish National Fund Menachem Ussishkin, introducing his friend H. Ruiper (Pisa, 19 Feb. 1933). 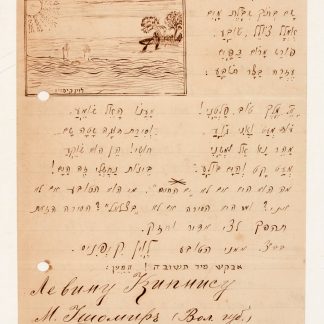