Notable collection of letters by prominent Zionist leaders, documenting the movement in the late 19th and early 20th centuries, issues including immigration to Israel and the founding of the Jewish Territorialist Organization. Comprises a TLS by the politician Chaim Arlosoroff, to Mr Probshtin, on the immigration status of 5 Poles (19 Dec. 1932).

2 ALS by Ahad Ha'Am ("Asher Ginzberg"), one to a "dear friend", on editorial affairs, the other to Dr. I. Tchlenov, on the privations and uncertainties faced by Zionist settlers in Jaffa in the early years of World War I. On headed stationery (29 Jan. 1899 and 21 Feb. 1915).

TLS by the writer Israel Zangwill, to Charles Rowley, declining an invitation to lecture due to his responsibility of establishing a Jewish Territorial Organization, advocating a Jewish homeland in whatever country might be available in the world, with speculations including Canada, Australia, Mesopotamia, Uganda and Cyrenaica (20 Sept. 1905).

TLS by a pioneer of Hebrew journalism, Nahum Sokolow, to Prof. Warburg, on the text of a polemical article by Menachem Ussishkin, in German. On headed stationery of the Zionist Central Office (21 June 1908).

TLS by Henrietta Szold, the founder of Hadassah, the Women's Zionist Organization of America, to the Hebrew Community Committee of Jerusalem, confirming a donation (stamped 16 July 1936).

ALS by the lexicographer Eliezer Ben-Yehuda, to Professor Shatz of the Bezalel University College of Art, on advertising in Hazewi. On Hazewi headed stationery (8 June, year illegible). 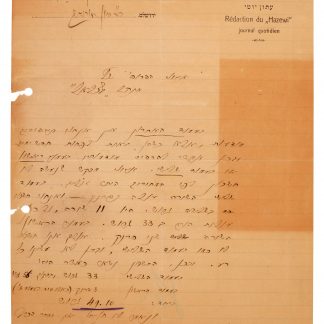