Extremley rare photographs from the first successful motor crossing of the desert from Damascus to Baghdad in 1919, preceding by four years the well-known efforts by the Nairn brothers, which resulted in the establishment of the overland mail service between Damascus and Baghdad. The photographs were taken by the 18-year old Eric Blackwell, who had planned to enlist as a pupil pilot in the RAF, had his training cut short by the Armistice, and decided instead to volunteer for the projected desert expedition. Carried out by a military convoy of 10 Model T Fords and some 15 men under the command of Lt. Col. Keeling, the aim of the expedition was to set up a chain of whitewashed stone markers to aid the pilots of an air mail service between the eastern Mediterranean and India, cutting out the lengthy Suez-Aden-Bombay sea route.

The photographs document the journey from Cairo to Haifa by train, then on to Damascus on established roads, up to the expedition's last outpost before the open desert, Dumair. The following pictures show the men setting up the stone signs, repairing their vehicles, sometimes having to push them forward (a total of six Fords had to be abandoned along the way), posing for group pictures, and travelling through the vast desert landscape, stops along the way including Abu Kamal, Ana, Ramadi and Fallujah, before reaching Baghdad, and going on to the ruins of Babylon, Basra, Bombay, Aden, and Suez.

Photographs are mounted in groups, with captions in English. Enclosed is an envelope containing seven loose photographs torn from the album, as well as a brief typewritten account of the journey, and correspondence relating to the loan of photographs for a magazine article, referring to it as a "grand trip". 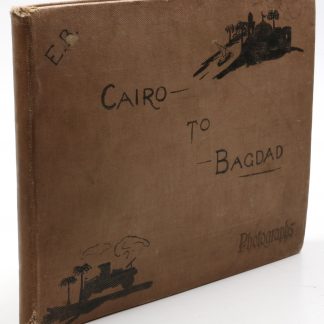