[Beckford, William]. [Vathek.] An Arabian Tale, From an Unpublished Manuscript: With Notes Critical and Explanatory.

The unauthorized first edition, first issue (with misnumbered page 48). This original edition, claiming to be translated directly from Arabic, appeared without the name of the author, also omitting from the title the name under which the work would later be known internationally.

Although often classified as an early Gothic novel, "Vathek" is more truly an oriental tale, describing the experience and rewards of succumbing to temptation, and closely reflecting the "foolish, fantastic, egotistical life" of the author who began writing the story in French in January 1782. Despite the fact that Samuel Henley's translation, and the elaborate notes which he provided for the book, were undertaken with his friend Beckford's approval, its publication was contrary to the author's express wishes: Beckford had clearly intended to bring out the French edition first, but his wife had died in Switzerland on 18 May 1786, and though the book was published by Joseph Johnson on 7 June, he was still unaware of its existence by late August. Copies were priced at 4 shillings or 7s. 6d. on large paper, and have the running title of "The History of the Caliph Vathek". Even though Beckford published French editions in Lausanne (December 1786, dated "1787") and Paris (1787), the novel only became well known some thirty years later when Byron declared it to be his Bible.

Provenance: From the library of John Bigham, 1st Viscount Mersey (1840-1929), at Bignor Park, Sussex (his bookplate to front pastedown and ink ownership to flyleaf). Subsequently in the library of the American publisher and collector A(lfred) Edward Newton (1864-1940), whose collection was auctioned by Parke-Bernet in 1941 (bookplate). Later acquired by the American lawyer and collector Robert S. Pirie (1934-2015), a prominent member of the Grolier Club, whose library was dispersed by Sotheby's in December 2015 (his bookplate to front flyleaf).

With the final blank Y8, which is often absent. Occasional light brownstains, but in all an excellent copy, beautifully bound and with fine provenance. 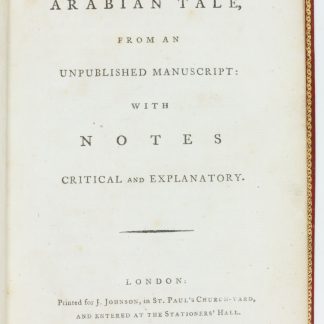