The first book printed with Roman letters in Turkey

First edition of the first book printed with Roman letters in Turkey. Holdermann's "Grammaire turque" is the first French-Turkish grammar, printed on behalf of the French embassy to the Porte, at the first printing press established in 1726 by Zaid Aga Effendi, son of the Turkish ambassador to France, and Ibrahim Müteferrika. The type apparently was sent out from France especially for this work. Words and phrases are given both in Arabic-script Osmanli and in Roman transliteration. The engraved alphabetic table displays the names and shapes of letter forms for French and Turkish alphabets, including the letter forms used in various styles of Turkish writing for different uses: Nesghi for the Qur'an, Divani for business, Tealik for law and poetry, Kyrma for public registers; Sulus, like capitals, is used for book titles and imperial patents, Jakuti, and Rejani.

Since 1719 the French embassy had been calling for improved instruction and grammatical texts, and the present work was compiled by Holdermann "aprés avoir consulté, & conferé avec les plus habils maîtres, sur tout avec le sçavant Ibrahim [Müteferrika] Effendi, sur cet langue" (preface) for the use of the school of the "Enfants des Langues" (the school of the dragomans, or official interpreters) at Constantinople. Holdermann's book was also adopted as a teaching text by the Jesuit College at Paris, which had received a number of copies from the librarian at the Bibliothèque du Roi, abbé Bignon, in 1731 and 1732.

Holdermann, a Jesuit from Strasbourg, spent some four years as a missionary in Constantinople, dying there in 1730. He had projected also a French-Armenian grammar, which was unfinished at the time of his death.

Binding a little rubbed; corners bumped. Insignificant traces of worming to lower gutter near the beginning; dampstain to margin of first quire and diffuse dampstains to pp. 131-138. The first leaf of the index is bound after the title-page, the remaining two at the end. Complete with the final errata leaf. 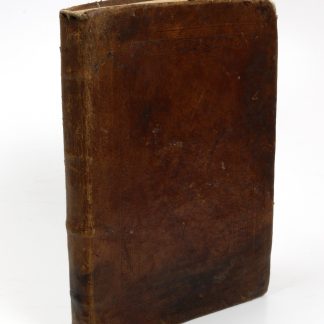