Only edition of this early milestone of Arabic typography from the Roman Medici Press, including a Latin treatise on Arabic script. The Medici Oriental Press, the first printing press in Europe dedicated to printing books in an Arabic typeface, was founded in Rome under the direction of Giovanni Battista Raimondi and the patronage of Pope Gregory XIII. For the Arabic types, Raimondi commissioned the famous typefounder Robert Granjon: "In a few years Granjon had cut a large number of oriental characters, following superb calligraphic designs provided by Raimondi. On September 6, 1586, he completed the small Arabic typeface [...] Because cutting the Arabic typefaces took such a long time, establishment of the Medici Press went slowly. Though the contracts formally setting up the press were signed on March 6, 1584, the first book to bear its imprint did not appear until 1591. Legible and much more 'oriental' in feel than those of de Gregorii, Postel or Spey, this face was not improved upon until the time of Ibrahim Müteferrika in the early 18th century [...] Once underway, however, the Medici Press was very productive. In 1592 it issued a prospectus of its Arabic type faces under the title 'Alphabetum arabicum' - a 64-page masterpiece of design which not only displays Granjon's beautiful types, but contains a careful Latin Essay on the Arabic writing system" (Lunde). Until 1610 Raimondi printed a mere eight works with Granjon's types, "all equally rare" (Smitskamp 29b), before a long hiatus ensued - probably due to the sluggish distribution of the works in the Orient, where everything produced in the West, and especially any printed specimen of Arabic script, was received with the utmost caution (cf. Fück 55). Even Smitskamp cites only four other productions of the Medici Press, but not this exceptionally rare one. One of the only three other copies known to have appeared in the trade was even thought to be incomplete by Sotheby's, since Adams's collation - based on the Trinity College copy - cites a 24-page appendix that is, in fact, an independent Medici Press grammar bound with the Trinity 'Alphabetum'.

Binding worn and rubbed; spine rebacked. Interior somewhat dust-soiled throughout with occasional light dampstaining; a few marginal annotations on the verso of the title cropped by binder. Title-page with minute wormhole affecting one word on verso; a small hole to the last leaf with loss of a few letters; stamp of a monk to margin of final page. Front pastedown has 1880s bookseller ticket by G. A. Young & Co. of Edinburgh pasted in. An entirely complete copy of an important and excessively rare publication. 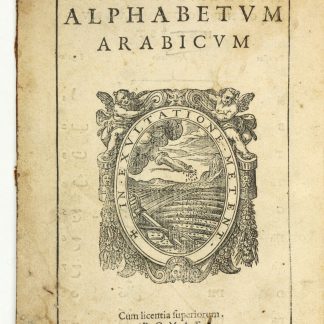