Bulgaria and other allies of Nazi Germany played a major role in supporting the German economical expansion during the 1930s and 1940s. The catchword "Großraumplanung" stood for the German industries' aim to expand throughout the Balkans and Turkey as far as Iran. A major sector of National Socialist business interests, the chemical industry in particular grew rapidly. Its leading players such as I.G. Farben promoted their anilin dyes by establishing local subsidiaries in the East who would then distribute bilingual swatchbooks such as the present specimen.

The tipped-in sample pages are captioned in German and Bulgarian throughout. Prefixed is a manual in both languages on how to dye the fabrics (several of which, such as sulan and shajak, are traditional Bulgarian cloths). 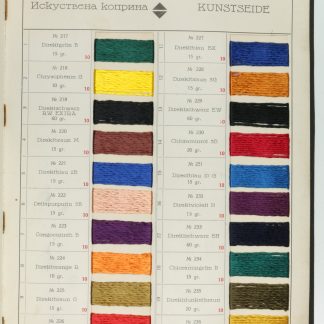