Exceptional collection of doctor's letters written by the noted Viennese psychiatrist Bruno Görgen, all to the Budapest merchant Aloys von Heinrich concerning his emotionally disturbed wife who was receiving treatment at Görgen's private sanitarium in Döbling outside Vienna:

"As I see from your letter of the 19th inst., you cannot bring yourself to believe that your wife should write you such cordial letters, and you tell me almost outright that you think they must have been dictated. In this, my dear friend, you are much mistaken, for why should I wish to deceive you, or indeed anyone? For if I intended, as you appear to believe, to simplify matters for her, [...] I could very easily have set her trial period at three or four months instead of six. [...] I insist on six months due to the many relapses she has suffered within the last 13 years, and if she passes the remaining trial period without further difficulty, she may most assuredly be pronounced a cure. I have already begun to discuss with her all the improper things she did when her ailment broke out and also during her last illness, because [...] I must ascertain whether [...] she recalls the events that occurred. [...] She remembers having bet at least 2,500 guilders on the lottery, of which she won back 500 guilders simply because she bet on all 90 numbers [...]" (24 June 1834).

"A priest could not encourage a sinner more fervently that I did your wife: indeed she promises to heed my advice, so as to remain healthy in the future, but I fear that her promise may remain merely that. Her mental illness, her folly is removed, and has been so for a full six months, and I have subjected her to severe tests, but whether she will also give up her obstinacy, this I doubt [...]" (19 July 1834).

"This very minute I preached to your wife my last sermon and repeated to her everything she must do from now on to remain healthy even at home [...]" (31 Aug. 1834).

"It is with much regret that I heard of the renewal of your misfortunes, and from what you tell me I understand that the malady began quite as it did last time, with shopping, irritability, an obsession with diversions etc. [...]" (24 Aug. 1835).

"The day before yesterday, by coincidence, your wife was observed by one of my employees to be driving about the city in a hackney cab. I immediately made the report to the police. [...] So as to obviate having to transport back and forth a mad person, you should, my dear friend, take care that some authority in place, either the magistracy or the police, get in touch officially with the local police here [...]. Seated with her in the cab were a woman with two children, and a young man with a black moustache [...]" (27 Sept. 1835).

"On the 17th inst. your wife arrived here [...] She was as kind to me as could be, and to my people; her good humour continues; she talks, cries out, chatters like a lawyer, and has brought with her a good stack of records and papers, and she would probably petition all day the emperor, the consistory, the palatine and all the archdukes if only I allowed her [...]; to put it in a word, she is rather confused [...]" (20 May 1837).

"I hereby send the desired medical bill for Mr von Heinrich of Pesth, namely for board, treatment, medicine, laundry and everything else. [...] I would ask you kindly to report to Mr von Heinrich what trouble I am having with my patient, for she will have everything, buy everything she thinks of, and only the daintiest of all will do [...]" (28 May 1838).

In 1829 Görgen, a native of Trier, set up his "private asylum for the insane" in the former Henikstein Villa in Oberdöbling, introducing then-revolutionary treatment methods without coercive measures such as shackling or straight-jackets, instead focusing on ergotherapy. The patient's husband, Aloys von Heinrich, was the proprietor of "Wurm und Heinrich", a successful hardware and wine-selling business in Budapest, and also ran a small bank.

Occasional wrinkling; some browning and duststaining; a few nicks and tears to edges, but very well legible throughout. An uncommonly comprehensive ensemble of psychiatric medical reports from Vienna's Biedermeier period. 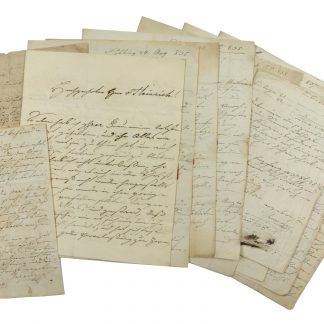