Alhazen’s optics, this copy gifted by Wilhelm Xylander: the exceedingly rare first edition of a milestone in Arabic science

First edition of "the most important work of its kind in Arabic literature" (cf. Poggendorf), this copy inscribed by the German humanist Wilhelm Xylander (1532-76), sometime rector of Heidelberg University.

Ibn al-Haytham (965-c. 1040), known as Alhazen in the Western tradition, has been hailed as "the greatest Muslim physicist and one of the greatest students of optics of all times [...] The Latin translation [...] exerted a great influence upon Western science. It showed a great progress in experimental method. [Alhazen's book contains] research in catoptrics, [a] study of atmospheric refraction, [a] better description of the eye, and better understanding of vision [as well as an] attempt to explain binocular vision [and the] earliest use of the camera obscura" (Sarton). "This combined edition served as the standard reference work on optics well into the 17th century, influencing scientists such as Brahe, Kepler, Galileo, and Descartes" (Norman).

"The Arab physicist Alhazen preserved for us all that was known by the ancients in the field of optics and added some contributions of his own. His book remained a standard authority thru the 1600s. He understood that light emanated spherically from a point and greatly improved on Ptolemy's uncertain rule for refraction which, he showed, held true only for small angles. He covered many cases of reflection and refraction and his explanation of the structure and function of the eye was followed for 600 years" (Dibner).

The 'Liber de crepusculis', the work on dawn and twilight included in Risner's 'Opticae thesaurus' and attributed to Alhazen, is actually the work of his contemporary Abu 'Abdallah Muhammad ibn Mu'adh al-Jayyani (cf. Norman; DSB, p. 208). The optical study by the Polish scholar Witelo, likewise here included, is "a massive work that relies extensively on Alhazen [and] offers an analysis of reflection that was not surpassed until the 17th century" (Norman).

Binding stained; edges worn. Interior browned with some waterstaining throughout the margins; occasional edge defects. Inscribed on the title-page by Wilhelm Xylander, professor of Greek and Logic at Heidelberg and editor of numerous translations from Greek (cf. ADB XLIV, 582-593): "Xylandri dono Antonius Roverius Nemausensis possidet" (followed by a Greek dedication and Xylander's signature). The recipient Antonius Roverius (Antoine Rouvier) from Nîmes had matriculated at Heidelberg on 1 July 1572.

Later in the library of the famed microscope builder and collector Alfred Nachet (1831-1908) and his son Albert.

An appealing copy of a principal work of Arabic science as received in the West with important provenance. 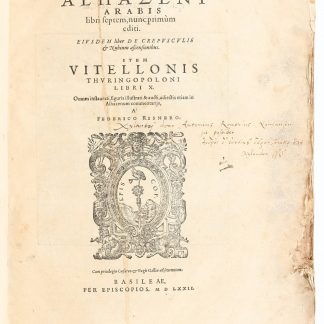