First editions. Both separately published parts of this rare work on the Spanish expedition against Muslim Oran. After a survey of the history and geography of Oran (in modern Algeria), the author describes the preparations for the expedition to recapture the city, enumerates the Spanish leaders, and gives details of the Spanish naval and military attacks on sites in and around Oran in June and July 1732. The captain-general of the expedition was José Carrillo de Albornoz, first Duke of Montemar, who had fought in the War of the Spanish Succession and the War of the Quadruple Alliance; at this time he was viceroy of Sicily. Facing p. 20 is the plan of battle for the Spanish forces. The woodcut on the verso shows the harbour at Oran, the town, and the half-dozen fortresses surrounding it, as well as the position of the Spanish navy during the battle. The final leaf has the key to the map on its recto, with the verso blank. Freire de Monterroyo Mascarenhas explains in the dedication that he compiled this account from many shorter ones, because the public was eager to learn about the reconquest. Oran, which was in Spanish hands since 1509, had been captured by the Turks in 1708, while Spain was preoccupied with the War of the Spanish Succession. Spain then held the city from 1732 until 1792, when it suffered a massively destructive earthquake and King Charles IV handed the city back to the Ottoman Empire. 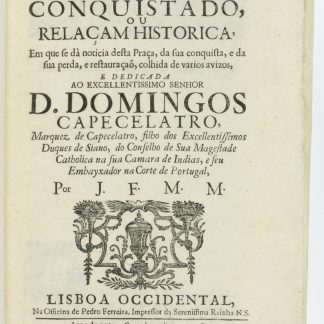