Extensive, near-contemporary collection of sources on the so-called "Grumbach Feud", a conflict between Wilhelm von Grumbach and the Prince Bishop of Würzburg which came to a head with the 1558 murder of bishop Melchior Zobel von Giebelstadt and then blended into a scheme of Duke John Frederick II of Saxony to transfer the Saxon electorship to his own family's line with Grumbach's help. The extremely brutal quarrel ended with Grumbach's being drawn and quartered in the Gotha marketplace, while the Duke was imprisoned in Austria for the rest of his life.

The present manuscript treats the years 1563 to 1567, from Grumbach's capture of Würzburg to the capture of Gotha by Duke Augustus of Saxony and the subsequent execution of Grumbach and imprisonment in Wiener Neustadt of Duke John Frederick. The well-organized manuscript contains an extensive index at the beginning and boasts a wealth of document and correspondence copies. An important source collection for the history of a 16th century conflict with wide repercussions throughout the Empire.

Spine, edges and corners professionally repaired. Front flyleaf has a handwritten acquisition note by the Austrian nobleman Maximilian Baron Pilati-Thassul (1819-72), recording that he paid 24 guilders and 36 kreuzers for the book. 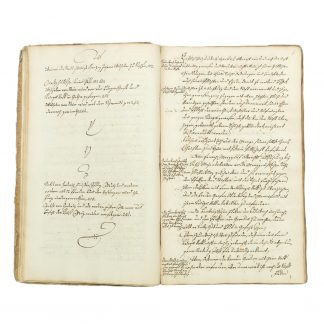