"Poetry is scandalous because it is truth itself": Jean Cocteau's "Causerie"

Beautiful draft for a lecture given by Cocteau during his four-month stay with his friend, the avant-garde composer Ivor Markevitch, in Vevey, Switzerland in 1938. The French text ranges from apparently incoherent cues to elaborate lines of thought, touching highly diverse subject matters such as surrealism, cubism, jazz, poetry, religion, Orphism, and some of Cocteau's favourite artists and historical figures including Picasso, Max Ernst, Marcel Proust, Baudelaire, and Napoleon. The "Causerie" revolves around an expansive definition of poetry and the idea that poetry is truth itself: "Epoch without sacred monsters. I am one of the last writers whose mythology gradually forms as he exists. Legends, follies, inaccuracies. Advantage of legends; one burns a straw man. Legends surrounding men living in a glass house and recounting everything [...] - We hate the truth. Here we come to the heart of our subject. Poetry is scandalous because it is truth itself. Poets, children (Let [them] come to me, he knew what he did). Quote the Swan in majuscules, very proud. Pure poetry. Nonsense from Minos and Pasiphae. Poetry everywhere. Vinci's time. Believed poet, painter, etc. Alas, we've gone too far. Any photographer is a poet [...] Beware of serious men, laughter rends a man in two, reaching the soul, following the tree, the bird. False grandeur, grandeur laughs. For Max Ernst's admirable photo collages, montages, etc. Poetry of posters, of window displays, of street shops. Music Hall, fun fair for a dime, before, after. Dangerous poetry, poet's room, police raid. Any suspect. Poets come from a country where the language is neither alive nor dead, not yet born, heard. The somnambulist poet exploited by forces, he cannot mingle too much, else he ends up with evil. I do not believe in precursors but loneliness is still loneliness. Even in real poetry [...]".

In a letter from 27 March 1953, Cocteau affirms his position that "artistic and religious audacity are not incompatible", naming the Catholic philosopher Jacques Maritain as an influence. In the final letter of the collection, Cocteau taunts the author Jean-Pierre Millecam as an "adorable egocentric" whose selfhood is the "star that governs his sky" (25 Feb. 1954). Apparently, Chapman had warned Cocteau of Millecam's character.

Deep tears to the spine and abrasions to the cardboard wrappers. The first two pages of the manuscript with the illustrations (on verso) are loose. Some pages show minor tears, two pages have further minor damage. Some browning. Two of the letters to Chapman show some tears and creasing. 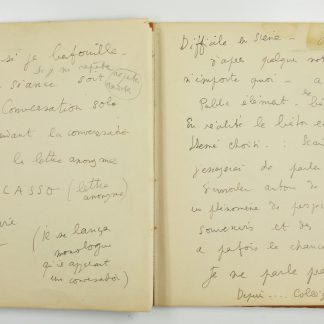