"I partake very vividly in your joys and pains": Victor Hugo's fight for Joseph-Dominique Magalon

4to. 2 pp. on a bifolium. With autograph address and traces of seal.

Passionate and elegant letter by the young Hugo to the oppositional publisher Joseph-Dominique Magalon (1794-1867) on the occasion of his release from prison. Hugo expresses his relief and joy about Magalon's release and explains that he had previously lost contact with Charles Alfred Frédéric Fayot, a co-publisher of Magalon's "L'Album", who had served as an intermediary for the two men and thus did not know exactly when Magalon would be set free. Mentioning his own part in the effort to release Magalon, Hugo emphasizes that what little he did was only his duty: "I have not done anything for you that was not part of what I consider the rigorous line of my obligations [...]". If anyone needs to thank somebody, Hugo writes, it is he himself "for the pleasure that your noble sentiments afforded me". Although impeded by "numerous occupations and an eye complaint that torments me", Hugo expresses his hope to meet Magalon soon.

The letter was written in reaction to a note that Magalon had added to his 1823 publication "Souvenirs Poétiques de Deux Prisonniers", thanking Victor Hugo, Chateaubriand, and others for their support. Magalon had been imprisoned in Poissy under harsh conditions and fell ill before being transferred to Paris, where he completed his 13-month sentence. In the note, Magalon apologizes for unfavourable criticism of Hugo's first major publication "Odes et poésies nouvelles" (1822) that he had written for "L'Album" before his imprisonment: "On the occasion of my transfer to Poissy M. Hugo took vengeance in a way worthy of his noble character, be it by petitioning ministers for me, or by making me the object of urgent recommendations that eased the horror of my situation" (Magalon, pp. 107f.). Despite his early fame founded by the "Odes et poésies nouvelles", which earned him a royal pension, Victor Hugo's influence at the time was largely due to his father, the highly decorated General Joseph-Léopold Hugo. Although Victor Hugo was a committed royalist in his early years, the earnest support for the republican Magalon illustrates his integrity and magnanimity in his lifelong fight for justice that forced him into exile 1851. 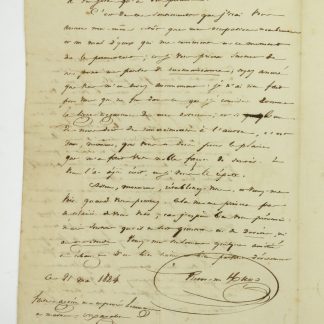