First German edition of this important Persian Mirror for Princes, published at the expense of the translator. Composed in the late 11th century by Kaika'us, ruler of the Iranian Ziyarid dynasty, the book is regarded as a major work of Persian literature. It describes the creation of the world and God's religious duties; duties towards one's parents; the cultivation of the mind and the power of speech; youth and old age; moderation in food; consumption of wine; chess and backgammon; love; the pleasures of life; hot baths; sleep and rest; hunting; polo; war; accumulation of wealth; trust in words; the purchase of slaves; the purchase of properties; the purchase of horses; marriage; children's education; the choice of friends; how to deal with enemies; forgiveness; punishment and favors; studies and legal functions; commercial law; medicine; astrology and mathematics; poetry; the art of minstrelsy; the service of kings; the qualities of a courtier, secretaries, viziers, generals and king; farming and agriculture; finally, generosity. A Turkish translation was commissioned in the mid-15th century by the Ottoman Sultan Murad II, and it is this version that was in turn translated into German by Diez.

The oriental scholar H. F. Diez (1751-1817) had trained as a jurist but, bored by his administrative occupation, soon left the Prussian civil service and in 1784 went to Constantinople as Frederick the Great's chargé d'affaires at the Sublime Porte. He was ennobled after only two years of successful diplomatic service. Recalled in 1790 on the eve of the Russo-Turkish War, the self-confessed Turkophile soon retired to the life of an independent scholar and book collector in Berlin. His orientalist publications captured the attention of the learned world, and he moved in the circles of Goethe, Gleim, and Alexander von Humboldt, though largely outside the contemporary tradition of academic oriental studies. "Between his years in Constantinople and his death, Diez pursued his Orientalist studies with extraordinary energy. A string of books authored by Diez and mostly self-published appeared in 1811 [...] Even if many aspects of his scholarly life are almost forgotten, his merits, especially for the development of Turkish studies, are noteworthy [...] His works, almost completely printed at his own expense, reflect his interest in the origins of Asian cultures, literatures, and politics, as well as everyday issues and ethics" (J. Gonnella et al. [ed.], The Diez Albums [Leiden, 2017], p. 58, 76). 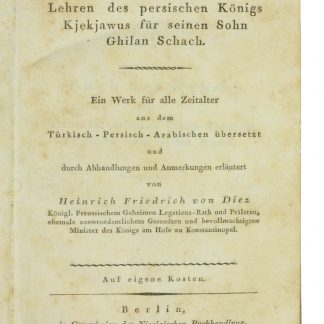