Governing Milan in times of war

The grandson of the famous politician and art collector Diego Felipéz de Guzmán (1580-1655) had a successful political career in his own right during the reign of Charles II of Spain. Upon his father's death in 1666, he briefly succeeded him as viceroy of Valencia. Later Guzmán served as viceroy of Catalonia (1678 and 1685-88) and as viceroy of Navarre (1684). In 1691 he was appointed governor of the Duchy of Milan, a powerful office that his grandfather, who's name he assumed, had held before him. During the War of Spanish Succession he remained loyal to the Habsburgs. Diego Dávila Mesía de Guzmán died without issue in 1711. The documents at hand span almost the entirety of Guzmán's mandate in Milan (1691-1698). - The most astonishing object in the collection is a decree from August 4, 1694 concerning a diplomatic conflict between Spain and France. In the course of a lawsuit against a French subject accused of handling stolen goods a diplomatic note of the French ambassador Pierre de Vilars (1623-1698) related to a different affair had surfaced. Vilars intervened in a conflict about the inheritance of the French merchant Philibert Vignon (1565-1630) who had died of the plague in Milan. Executing the last will of his uncle, Vignon's nephew and heir endowed the famous Hôtel-Dieu in Lyon with the considerable inheritance. The government of Milan, on the other hand, confiscated the money and added it to it's budget. The dispossession was based on a ruling of the so called "Junta de Represalias", a commercial court that was established as a protectionist means of economic warfare. According to the decree the sum in question amounted to 117.000 Livres and Vilars demanded a refund with interest. Pointing to the Nine Years' War (1688-1697), which was also fought in Catalonia und Northern Italy, Guzmán rejects the demands and affirms the legality of the dispossession: "Y Considerando ahora la Junta, que con la presente guerra no hay duda que este Caudal assi principal como interesses me toca por legitima Represalia y que combiene se determine assi y anote en los libros de la Thessoreria General de ese Estado de Milan paraque la Real hacienda que de libre y no se le pueda combenir por esto; He Resuelto conformarme en todo con el sentir de la Junta por las Razones y fundamentos que van expressados y os mando deis las ordenes necessarias a su cumplimiento [...]".

Only after the War of the Spanish Succession did the Spanish authorities eventually fulfill Vignon's last will. He is listed among the donors of Hôtel-Dieu in Lyon.

6 documents in the collection are royal orders for payments and gratifications on behalf of Spanish and Milanese subjects. The officer's commission for a certain Angelo Belotto was issued on March 9, 1694.

The printed decree from December 29, 1693 is a renewal of the Royal monopoly on tobacco in the Duchy of Milan with detailed legal regulations.

All ms. documents are counter-signed several times and annoted, 5 documents with papered seals.

Generally good condition, some bends, occasional browning to the edges, especially on the printed decree. The officer's commission somewhat brittle in the folds. 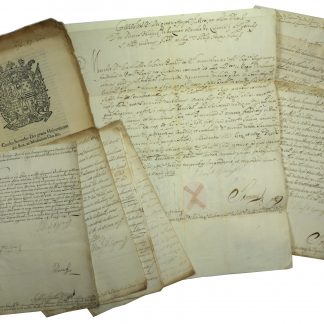