A wide-ranging discussion of the East Indies trade in 1787: Slaves, India, Australia, and China

Very rare sole edition of this defense of the newly-reformed Compagnie des Indes and its commercial activities in the Far East, apparently written by a shareholder, with chapters ranging from West Africa to the Arabian Gulf, India, China, Japan, and even Australia (cf. Ferguson). Spectacularly unsuccessful compared to its European rivals, the French East India Company was suppressed in 1769 but a new charter was granted in 1785 to a "Nouvelle Compagnie des Indes". The avant-propos identifies the anonymous author as an "investor, not a speculator" in this newly-founded Compagnie, and aside from his observations on commercial trade with each nation, he also offers broad arguments supporting the monopoly of the Compagnie and even state-sponsored aid for its activities. The French Revolution brought a swift end to the Compagnie in 1790, and its liquidation in 1793 caused a scandal which involved many deputies of the revolutionary government.

In the author's chapter concerning the west coast of Africa, we find a typically pragmatic Enlightenment approach to the atrocities of slavery: "At the present moment, the slave trade on this coast is a very interesting object for our commerce, due to the abundance and the cheapness of these unfortunate victims of the barbarism of these climes, the need for them in our Ile de France [Mauritius] & Bourbon [Réunion] for the development of agriculture, and due to the ease of selling the excess slaves beyond the needs of those two islands to our colonies of America, & even to those of the Spanish. They [the Spanish] have been forced to depend on the English to provide them with blacks. We could enjoy a preferential treatment [...]".

Again on pp. 22f., in a discussion of Madagascar, he makes his position clear: "The slave trade requires a great deal of caution in its conduct, so as not to alienate the goodwill of the natives. If we buy the prisoners taken in wars from the small nations that share control of this island; and if the advantage of fetching a price from the sale of these unfortunate prisoners spares them the cruel death to which, without this resource, the barbarian victors would subject them, then the expectation of fetching a price from [their sale] need not ever be the cause of war between these small nations [...]". 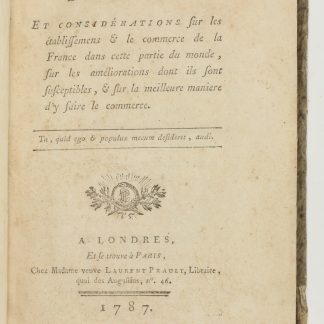