4to. 3 parts in one volume. (12), 210, (6) pp. With woodcut printer's device, a headpiece and a few woodcut illustrations in the text. Numerous examples of sheet music. Contemporary full vellum with handwritten spine-title.

Rare treatise on musical theory by the Italian composer Berardi (1636-94), a highly prolific artist and theorist particularly focused on church music. It includes the "Osanna" from Berardi's "Iste confessor" mass (pp. 69-78) and displays his broad knowledge of relevant publications on the subject, as well as his admiration for other scholars, including Athanasius Kircher, Marin Mersenne, and his teacher Marco Scacchi, all of whom he frequently quotes. The "Miscellanea" discuss, inter alia, the canto fermo, as well as the history of counterpoint and its practice in the 17th century (pp. 112ff.), promotes a more liberal and frequent use of dissonances (pp. 82ff.), and analyses the manner and form of tempi generating different musical effects (pp. 56ff.). It explains the musical forms of the day as well as the relations between classical and modern music, rejecting the "uniformity of the past and preferring melodic composition instead" (cf. MGG).

Head and foot of spine slightly rubbed; covers a little bowed. Paper evenly browned and brownstained throughout; upper margin somewhat waterstained. Handwritten ownership of the friar Griziottus of Piacenza, as well as of Charles Missieli to title-page. Missieli's ownership is further stamped in four places, partly erased from the title-page, p. 122, and final page, but remaining on p. 196. A few marginal notes and highlights in pen and pencil. Rarely seen at auction. 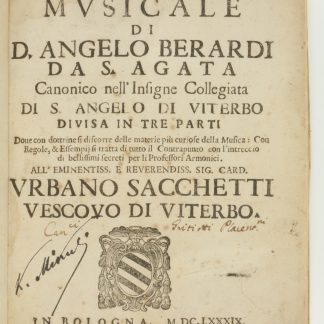