Greek text and Latin translation of the "Introduction to Harmonics" by the Greek scholar Cleonides, the pupil of Aristoxenus, erroneously ascribed to Euclid, and of the "Division of the Scale", about whose true authorship there is no agreement. Edited by the French mathematician and educator Péna (ca. 1528-68), the book reflects the influence of classical mathematicians on Renaissance music theory and was a key work for the wide distribution of music theory of the classical period.

The attribution of the "Eisagoge" to Euclid (or to Pappus in some manuscripts) is incompatible with the Aristoxenian approach adopted in the treatise, namely that "the scale is formed of notes separated by a tone identified by the ear" (DSB IV, 430). Cleonides's treatise is the clearest account of the technical aspects in the work of the philosopher Aristoxenus, who defined key terms of music theory, including the interval, whole tone and semitone, pitch space, and rhythm.

The other musical work here ascribed to Euclid, the "Sectio canonis", expounds a quite contrary theory, namely "the Pythagorean doctrine that the musical intervals are to be distinguished by the mathematical ration of the notes terminating the interval [...] All that it seems possible to say with certainty is that Euclid wrote a book entitled 'Elements of Music' and that the 'Sectio canonis' has some connection with it" (DSB). Wechel printed both works in Greek as the first part and followed them with both Latin translations in the second.

Modern binding a little soiled and occasionally scratched; upper cover slightly bowed. Contemporary handwritten table of contents to second flyleaf (preserved from the first binding), mentioning another work by Péna, his translation of Euclid's "Optica & Catoptrica", also published in 1557, which appears to have been bound with the "Eisagoge" at the time. Second half shows a few light waterstains to the margin. Traces of an erased handwritten ownership on title-page. Rare; not seen at auction for nearly two decades. 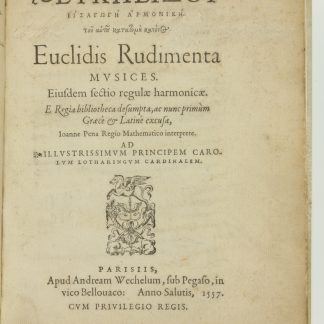