Protecting the Middle Eastern oil fields in times of war

8vo. (2), 17 pp., final blank page. With 2 half-tone photographs in the text and a folding map of the area between Baghdad and Beirut. Staple-bound. In original printed wrappers.

Exceedingly rare pocket-booklet of leave instructions issued to members of the Persia and Iraq Force during the Second World War, "in the hope that it will help [them] to understand the type of country and the places [they] will see on [their] journey" (first page). Subdivided into three sections, the first part of the booklet describes the route taken by the leave convoy from Baghdad via Fallujah, Habbaniyah, Ar-Rutba, Mafraq and Damascus to Beirut, deeming the last portion from Damascus "by far the most picturesque part of the route" (p. 4), and finishing off with a photograph of people relaxing on the beach. The second section comprises a history of Damascus and the Syrian desert by Seton Lloyd (1902-96), who had been appointed archaeology adviser to the Directorate of Antiquities, Baghdad, in 1939, and during the war "was able to conduct some notable research, principally the excavation of the painted temple at Uqair and later of Tell Hassuna, where he identified a new culture - and the earliest known - in Iraq" (obituary, Independent, 13 Jan. 1996). The third and last section discusses the construction of the Baghdad to Haifa road by the British between 1938 and 1943.

General Edward Quinan's Iraq Command (originally Iraq Force) was renamed Persia and Iraq Force (Paiforce) shortly after the successful Anglo-Soviet invasion of Persia in August 1941. The main responsibilities of Paiforce were to protect the Iraqi and South Persian oil fields and to maintain the lines of communication from British-controlled ports on the Persian Gulf to the Soviet ports on the Caspian. A dedicated Persia and Iraq Command was established under Sir Maitland Wilson in August 1942, though victory in the Western Desert Campaign combined with series of Soviet victories in southern Russia meant that Paiforce activities began to be wound down from mid-1943. The folding map to the rear of this booklet provides a detailed overview of the vital infrastructure roads and oil pipelines which they were tasked with defending.

Mended tear to upper cover; traces of folds and a little soiled. Handwritten numbers in orange crayon to lower cover. The interior with traces of a vertical fold throughout, resulting from the pages resting on the rim of the folding map; margins slightly creased. Map somewhat foxed. An uncommon survival, with only the Imperial War Museum copy traceable in institutions. 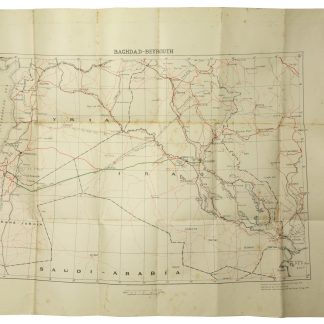